The attacks took place between Thursday, June 10 and Sunday, June 13, according to Fulani leaders and some of the victims.

According to victims and witnesses, some young Fulani herders tending the livestock were injured, and over 500 animals that strayed into neighboring Benue State have yet to be retrieved.

According to some sources, hundreds of cows were murdered in the Giza Development Area of Keana Local Government as part of a military operation to clear the area of bandits.

Over 1000 cows were killed and numerous more were injured, according to our correspondent in Lafia, Nasarawa State.

“Operation Whirl Stroke of the Nigerian Air Force Base Makurdi in Benue State was in charge of the aircraft that carried out the operation,” a source claimed.

“Some bandits shot at a military aircraft, which caused the shelling of the entire area,” according to the sources. One of the gunships was painted in the colors of the Nigerian Air Force, while the other was painted in army green.”

Some Fulani leaders, on the other hand, said the attack was unprovoked.

Hundreds of cows were also slain between Kwatanbala and Akwanaja in Doma LGA, according to Bala Mohammed Dabo, interim Chairman of Miyetti Allah Cattle Breeders Association of Nigeria (MACBAN) in Nasarawa State.

“During a separate attack on Thursday in Kuduku, Keana LGA, Alhaji Jigawa lost a large number of cows. In Nasarawa State, we met with military authorities. The officer in charge here was the overall commander in Benue, and he vowed to elevate the situation to the appropriate authorities.

“We pleaded with them to end the unjustified siege and slaughter of cows in Nasarawa State,” he said. A governor from neighboring Benue should cease interfering in Nasarawa’s affairs. Because no one speaks for us, the Fulani are the most despised people in Nigeria. Without provocation, we are being killed and injured, and our source of income is being taken away.

Its goal is to exterminate the Fulani people. “The federal government must step up to the plate and save our people,” he stated.

The Fulani chief also denied invading Benue territory, which has an anti-grazing ordinance in place.

“There is no reason for gunships to fly into Nasarawa territory and slaughter cows. If they had been slain in Benue, things would have been different,” he continued.

Another victim, Ibrahim Adamu of Akwanaja ward in Kwatanbala LGA, said the gunships killed 40 of his cows on Thursday.

“Our cows had returned home from grazing when the plane came in around 6 p.m. and killed them. We’re in a lot of agony, and we’re hoping for assistance from whatever source we can find. “The cows are our main source of income,” he explained.

Abdulkareem Bayero, the Chairman of the Coalition of Fulani Youths Groups of Nigeria (CFYGN), stated awful things were going on in Nasarawa State that were not being reported.

“We are pleading with the authorities to intervene in the Fulani terrorism. In Nasarawa, there is no anti-grazing legislation, thus there is no basis for air force gunships to come in and destroy hundreds of cows belonging to innocent Fulani herders.

“The onslaught has been going on for a long time, with the most recent attack occurring on Thursday. Aside from the cows slain in the LGAs of Awe and Keana, hundreds of others have fled to Benue State, where they have been rustled by the locals. 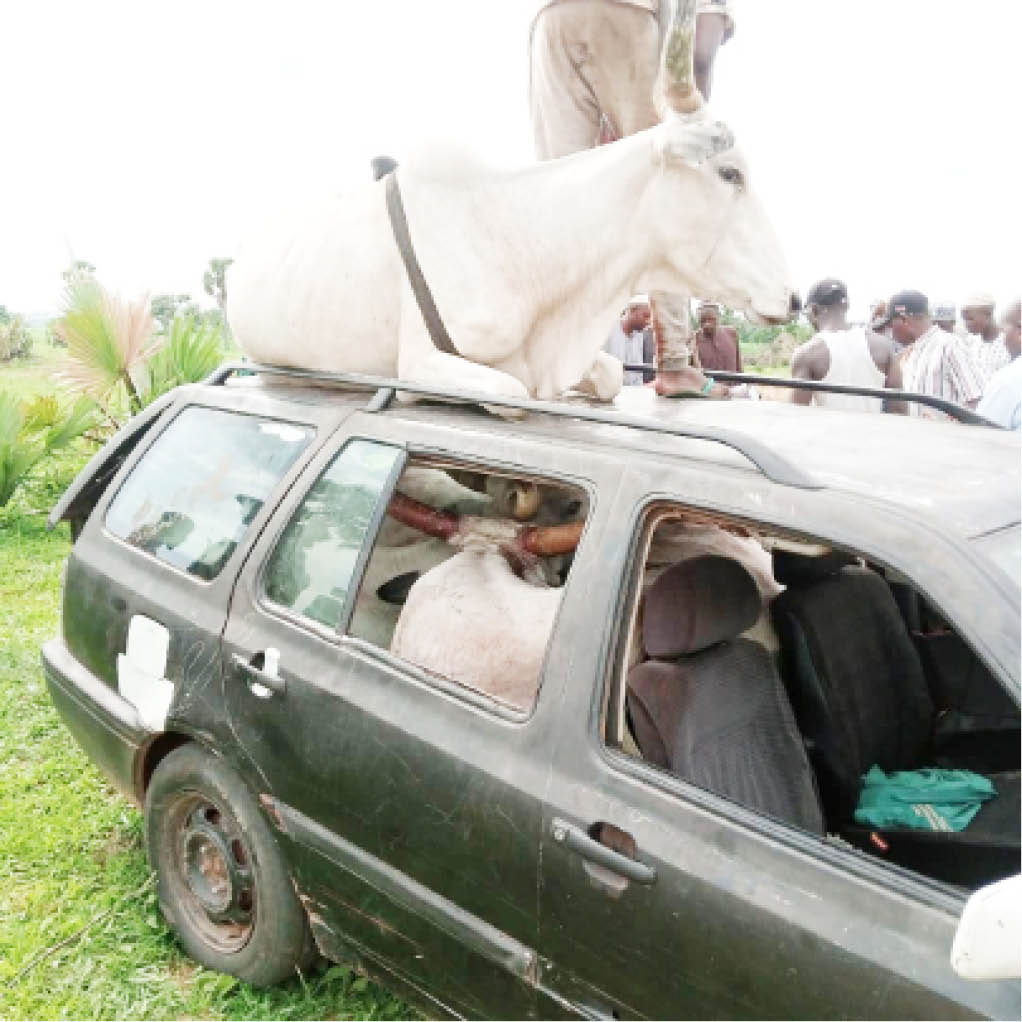 “We need the federal government’s help; we need compensation for our people. If this kind of lawlessness continues, peace will continue to elude the country,” he said.

“Around 6 a.m. on Sunday, two aircraft from the side of Benue launched sporadic attacks and killed our cows,” said Ya”u, a youth leader in Keana.

“When they returned the second time, at 9 a.m., they began bombing the injured cows again, just as our workers were attempting to save some of them. Aside from the hundreds slaughtered, more than 500 cows have gone missing.

“We are in distress, we need urgent intervention. Government must talk to the military to stop the offensive. We are compelled to suspect that the government at the centre is also complicit because only the federal government has the power to dispatch aircraft to go and bomb a target.

“We are living peacefully in Nasarawa, we don’t have any case with the host communities and we have never been suspected of banditry or kidnapping but our people are now the target of attacks; we are in serious disarray,” he said.

“We are in distress, we need urgent intervention. Government must talk to the military to stop the offensive. We are compelled to suspect that the government at the centre is also complicit because only the federal government has the power to dispatch aircraft to go and bomb a target.

“We are living peacefully in Nasarawa, we don’t have any case with the host communities and we have never been suspected of banditry or kidnapping but our people are now the target of attacks; we are in serious disarray,” he said.

Another victim, Idrissa Zakaria, said he lost over 50 cows, adding that the first attack was launched between Katanbala and Akonoja.

He said the gunships moved to Giza in Keana LGA. “The gunship will come low and shot at the cows; some of the boys tending the cows were also injured.

“We suspect Governor Samuel Ortom of having a hand in this…He is the one who is giving the military resources to attack us,” he said.

Governor Ortom in his response to the allegation that the Nigeria Air Force (NAF) aircraft was bombarding and killing cows belonging to herders in border areas of Benue and Nasarawa states said that the military was aware of President Muhammadu Buhari’s order to shoot-on-sight.

Ortom, through his Chief Press Secretary, Terver Akase, added that the people being chased out of the forest were terrorists and not law-abiding Nigerians.

“Remember that Mr President recently gave an order that anyone with AK-47 should be shot. The military is aware that terrorists and bandits bearing AK-47 have occupied the forests from where they come to attack and kill innocent people. Those people being chased out of the forests are terrorists, not law-abiding Nigerians,” Akase said.

On the part of NAF in Benue, the Command Public Relation Officer (CPRO), Wing Commander Chris Erondu, when contacted, directed our correspondent to the media office of NAF headquarters in Abuja for comments on the matter.

When contacted on Sunday, the spokesman of the Nigerian Air Force, Air Commodore Edward Gabkwet, told one of our correspondents via telephone that it was not the personnel of the force that carried out the operations.

But the Acting Coordinator, Defence Media Operations (DMO), Brig.-Gen. Bernard Onyeuko, when contacted, did not answer calls to his phone.

Gabkwet, however, described the report that anybody or any animal was killed as “false” noting that banditry activities were already spiralling in the Benue State capital, Makurdi, where some bandits wielding AK-47 were mingling with the locals.

According to him, “the story is totally false. There are some banditry activities not far from Benue State; somewhere very close to Makurdi. It is between Makurdi and Lafia. So, our helicopter went there and tracked some bandits we saw with AK-47.

It was gathered that farmers and Fulani herdsmen in Giza Development Area who are living at the border area between Nasarawa and Benue states have started migrating from their respective homes of abode to the state capital for fear of the military bombs.

Sources said many of them have abandoned their farmlands and cattle as a result of the alleged bombardment of bandits and kidnappers’ camps.

When contacted, the Director of Personnel Management in Keana LGA, Galadima Abubakar, said he was not aware of military presence or bombardment of bandits and kidnappers.

Efforts to reach out to the Commissioner of Information, Culture and Tourism, Dogo Shama, to get the Nasarawa State government’s side of the story proved abortive as several calls to his phone did not go through as of the time of filing in this report.

Also contacted on phone, the Police Public Relations Officer, Nasarawa State Command, ASP Nansel Ranham, said the command was not aware of bombings in Giza and other locations.

US CIA: The Manifest of the Unholy Saint in Africa