It has emerged that claims by Dr. Mrs. Seinye Lulu-Briggs, wife of late High Chief O.B. Lulu-Briggs, that sons of her late husband had appealed against a high court ruling concerning the burial of the High Chief were “false”.

Mrs Lulu-Briggs, who is also a pastor, alleged that Chief Dumo Lulu-Briggs, one of the surviving sons of her late husband, had opposed the release of the autopsy result on the father.

But available documents from court have exposed Dr. Mrs. Seinye Lulu-Briggs as being the one who is rather leading an appeal against last week’s ruling by the Accra High Court on how the late High Chief should be buried in his country Nigeria.

“The truth of the matter is that on while Dr. Mrs. Seinye Lulu-Briggs was making a statement which was publicized by TheCable, accepting the ruling of the Accra High, her lawyers were preparing a Notice of Appeal, and in the early hours of 24th December 2019, Seinye filed a Notice of Appeal against the court’s decision to hand over the body of High Chief O.B. Lulu-Briggs to his family,” a source close to the family of the late Lulu-Briggs, told new reporters.

Read the Notice of Appeal filed by Seinye’s lawyers on her behalf showing the date and time of filing. (attached) 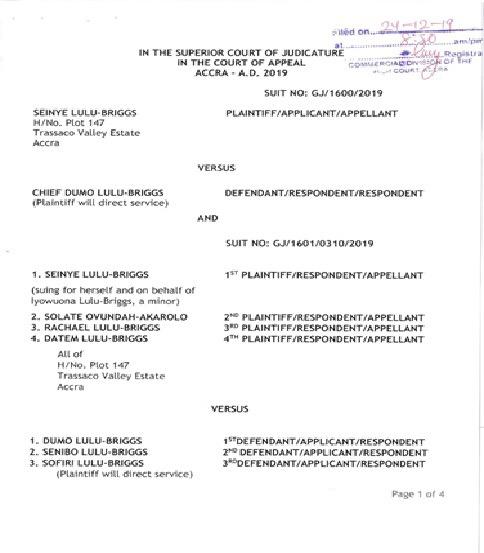 “In her much characteristic style, Seinye Lulu-Briggs tried to deceive everyone into thinking that she had accepted the decision which would have her late husband buried as soon as possible, while she was scheming to frustrate all efforts by the family to do so. If indeed as Seinye said, the order of the court was in accordance with her late husband’s wishes, then she has once again disregarded her late husband’s wishes and dishonoured him, in a way that has left all right thinking members of society gasping,” the source pointed out.

Even though Seinye says Chief Dumo Lulu-Briggs went to obtain the body without fulfilling the preconditions of the judgement, it has been established that he has not stepped foot at the funeral home where his father’s body is being kept, since the order of the Accra court granted him the right to lead the family to convey the mortal remains of High Chief O.B. Lulu-Briggs to Nigeria.

The Justice of the Court of Appeal (sitting as an additional High Court Judge) said in his order for the delivery of the body of High Chief O.B. Lulu-Briggs to his family, that he hoped that his ruling would bring an end to the wrangling between the family and the widow, so that the family can bury the deceased whom they all say they loved so dearly.

Alas Seinye Lulu-Briggs will not let that happen.” In her much characteristic style, she deceived everyone into thinking that she was the grieving widow, who had accepted the decision which would have her late husband buried as soon as possible, while she was scheming to frustrate all efforts by the family to do so”.

Even though Mrs Seinye Lulu-Briggs published in the media that she supports the January burial date for her husband, it looks her recent actions have jeopardized the burial arrangements which had been previously announced to hold on 25th January 2020, because the family of the Late High Chief O.B. Lulu-Briggs cannot plan the burial of their beloved patriarch without having custody of his mortal remains in Nigeria.

Shall we fold our arms and let Abdulrasaq destroy the legacies of Saraki in Kwara?