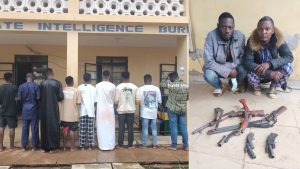 The two suspected kidnappers, Rafiu Ganiyu (45) of Idi-Ogun Compound, Ganmo and Mustapha Afolabi (42) of Beside Ganmo, were arrested at about 0530hours on Friday on a motorbike along Ganmo/Omu-Aran highway by eagle eyed police operatives on stop and search duty.

A statement by the spokesman of the command, Mr Okasanmi Ajayi, in Ilorin on Friday, said ” when a search was conducted on them, three locally made pistols and four locally made cut to size guns were found on them.

“On interrogation, the suspects could not give a satisfactory account of themselves, fuelling the suspicion that they were on a kidnapping mission,” he added.

The statement also disclosed that nine suspected cultists were arrested by police operatives in a similar operation on 18/08/2021 at about 0900hours, while on patrol along Malete area, acting on actionable Intelligence that a group suspected to be cultists had assembled at a location in Malete.

“A team of operatives attached to the command swooped on the location and nine suspects were arrested.

“In their statements, they confessed to being internet fraudsters and scammers.

“Some exotic cars, phones and laptops were recovered from them,” the spokesman disclosed.

He said the suspects in both cases would be charged to court as soon as investigations are completed.

The state Police Commissioner, Emienbo Tuesday Assayomo, has again assured the good people of Kwara State of effective policing of the state and readiness of the police to respect their fundamental human rights in the course of performing their duties.