The Nigerian Armed Forces has announced the promotion of Acting Director, Defence Media Operations, Brig.-Gen. Bernard Onyeuko to the rank of Major-General. 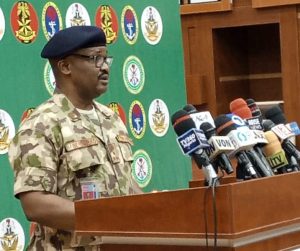 234 other personnel in the military were also promoted.

The promotion came barely one week after rife insinuations that the Chief of Defence Staff, Gen. Lucky Irabor, asked not less than 50 Generals in the military to proceed on forceful retirement.

Daily Trust reports that the promotions were released last night after the sitting of the Army Council, Navy council and the Air Council respectively, held at the Ministry of Defence with the Minister of Defence, Maj.-Gen. Bashir Magashi (Rtd) as presiding chairman.

In the latest promotion, our correspondent gathered that the Nigerian Army promoted 36 officers to the ranks of Major-Generals from Brigadier-Generals, while 76 Colonels were promoted to Brigadier Generals.

Where President Buhari Will Stay After Leaving Office, El-Rufai Reveals