Itunu Babalola, the Nigerian lady who died in prison in Côte D’Ivoire after she was wrongly jailed, has been buried in Ibadan, Oyo State. 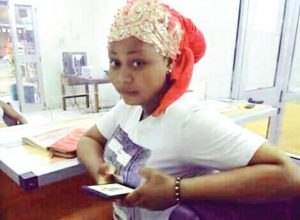 The remains of Babalola were interred on Saturday at the Sango Cemetery at 11:25am.

She was buried in the presence of officials of the Nigerians in the Diaspora Commission sent by the Chairperson, Abike Dabiri-Erewa.

The deceased’s body had arrived at the Murtala Muhammed International Airport Lagos on Friday at 11pm via Air Côte D’Ivoire and had been conveyed to Oyo State.

Babalola reportedly died on November 14 and Nigerians had taken to social media to express deep anger over the death of Babalola.

According to reports, 21-year-old Babalola from Oyo State was a trader based in Bondoukou, Cote d’Ivoire. Her apartment had been burgled by an Ivorian in September 2019 and she had reported the incident to the police but DPO informed her that the suspect was his nephew. He reportedly offered her a settlement worth roughly N100,000 to drop the case, an amount lesser than the N300,000 worth of stolen effects.

Babalola was subsequently arrested when she refused the settlement, charged to court for human trafficking and sentenced to 10 years in prison.

A journalist, David Hundeyin, had shared the story of Babalola on Twitter in March 2021 and the NIDCOM had said it was working to prove the innocence of Babalola.

Abike Dabiri-Erewa had confirmed that the lady was charged and incarcerated for a crime she didn’t commit.

However, many Nigerians were shocked on November 14 when Hundeyin, who had been following the case, gave serial updates that Babalola’s contracted an infection in the Ivorian prison.

Some were gutted that eight months after NIDCOM promised to ensure justice was served on the matter and secure the lady’s freedom, Babalola still remained behind bars in the Francophone West African nation.

In defence, Dabiri-Erewa, blamed Babalola, saying she reported her plight late to the Nigerian Commission in Ivory Coast after she had spent two years in jail.

“She did not inform the mission about the trial. She had spent two years in jail, then her father cried out for help. Perhaps, when she had issues with the burglar and policeman that was changing the case and reported to the Mission, maybe it would have been a different story,” the former member of the House of Representatives said, a comment that many described as unsavoury.