Mistress turned second wife of Nollywood actor, Yul Edochie, Muoghalu Uchechukwu Judith,  better known as Judy Austin, has responded to negative comments directed at her after the actor announced he welcomed a bouncing baby boy with her.

News Direct earlier reported that the father of four had taken to his Instagram to announce that he had welcomed a baby boy with his second wife, Judy Austin. 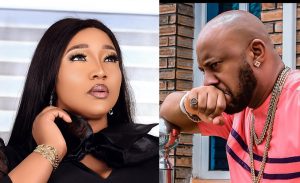 He wrote; “It’s time for the world to meet my son. His name is STAR DIKE MUNACHIMSO YUL-EDOCHIE. Born by my second wife @judyaustin1 And I love him so much, just as much as I love my other children,”

This however led to a backlash on Justin’s Instagram page.

Responding to the backlash, she wrote, “I am not ashamed to say I am nothing without you Jesus. Have a wonderful day bunnies.”

Meanwhile, Justin in an earlier interview with The Sun, revealed her most memorable moment as an actress.

She said: “My most memorable one right now is Native Girl. As it was very challenging, and working with director Yul is not a joke my sister. You must get it exactly as his seeing it or nothing. The second one was a movie called (Orombo) where I acted as a tomboy. I had to learn how to ride a bicycle on set and still shot the same film with it. It was crazy.”

PDP Sets Up Panel To Beg Wike
11 hours ago