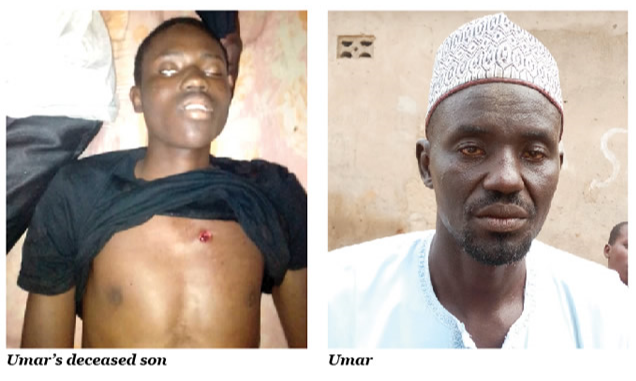 What was the name of your deceased son?

How old was he?

What job was he doing before he was killed?

He was selling eyeglasses. He was doing business. He was not married.

Were you and your late son part of the procession?

Yes, I was there. I saw how it all happened.

Since the Federal Government had said that you should not hold any procession, why did you allow him to be part of it?

There were people who were younger than him and were in attendance. The procession was meant for all adherents. There is nothing binding me to the order of the Federal Government. Do not forget that the procession was a religious affair. So there was nothing wrong with it. Everything we did was based on our religious inclination and that is very paramount to us, especially when you believe in what you are doing. We will continuously remain on this path and we will not leave it.

How did your son die?

We were in the market area during the Ashura procession. We had rounded off with prayers and then we saw police vehicles and personnel numbering about 100. Someone came to tell us that policemen were coming to that place. Immediately, they started shooting and Sirajuddeen was shot in the chest. His mobile phone which was in his breast pocket was also hit by the bullet and he died instantly.

How does his death make you feel?

I’m unhappy; as you know, it is not easy to lose a son. I’m only pleased because my son died for the sake of our creator.

What is your expectation of the government following the incident?

We have not heard from the state or federal government till now. The only thing we heard was that it was a lie and that they didn’t kill anyone, which is very unfortunate. But as you can see, we are truly mourning the death of my son and those of two other families. We don’t have any expectation from the government.

For some time now, El-Zakzaky has been in detention; what do you think about this?

We have been asking the government to free our leader. Our movement is straightforward and transparent. We only seek social justice and we don’t seek it through violent means but through messages. In the name of peace, it is advisable for the Federal Government to release our leaders.

But the Federal Government has often described your organisation as violent…

This is just cheap blackmail. If we were not peaceful, we could have resisted them. We don’t condone killing and we won’t kill anyone. Our concern is to build a peaceful society, where the rights of citizens are supreme, where social justice prevails, and which is not corrupt. We promote human and societal development.