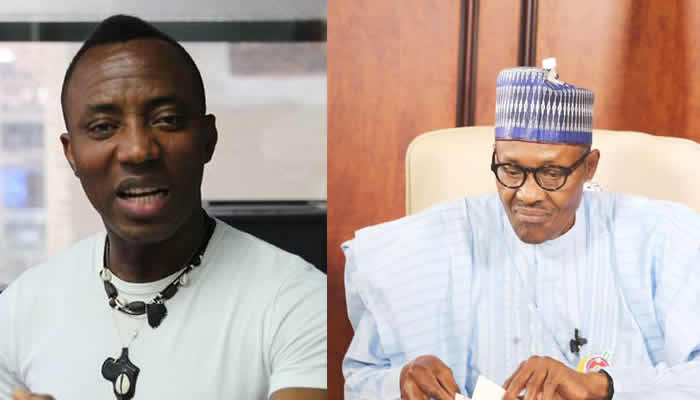 The service is accusing the SaharaReporters publisher of causing insult to the person of President Muhammadu Buhari, money laundering and treason.

Sowore has been in detention since August 2. He was arrested on the eve of a nationwide protest which was scheduled to hold on August 5.

After his arrest, there was a crackdown on #RevolutionNow protesters by security agents around the country on the day the protest was scheduled to hold.

Following the news that Sowore was being charged for insulting the president, Nigerians took to social media to react.

After this sowore news, I no go ever insult buhari again, I no wan go jail abeg

Full dictatorship that’s buhari for Nigerians… Can you imagine FG, Abba kyari and DSS accused him of insult…. That’s why Sowore in the prison languishing?

Nigerians must have sense by force by fire 🔥

It’s now a crime to insult the president

One of the charges against Sowore is for insulting Buhari

With a rubber-stamp National Assembly, a bill may be passed to that effect

I think I want to finally leave for Canada. Buhari charging sowore for insult and cyberstalking is uncalled for. It only proves that the country have a To-do list of misplaced priorities. Infact It’s verified that we dwell in a sick nation. please when is the next bus leaving .

When Goodluck Jonathan @GEJonathan heard that Sowore who was paid to insult him between 2011-2015 in Favour of Buhari is being charged for insulting Buhari. I don’t want to interfere in a family matter abeg. 😂😂🤣#FreeSowore#FreeSoworeNow#BBNaija#VoiceOfTheDon pic.twitter.com/v662hZB5cO

Sowore worked verywell for Buhari and Apc in 2015, he used his Sahara Reporter’s platform to abuse, insult and drag former President Goodluck Jonathan but today He is a victim of the govt he assisted to power.

May your story never be like Sowore’s case in Jesus name.
Bolanle.

Insult is not a crime. It’s a personal issue; best you can do is sue for libel. We don’t have Lese Majeste law in Nigeria 🇳🇬 insulating the president from insults.
FG charges Sowore with treasonable felony, accuses him of insulting Buhari https://t.co/m5EyQdaYM0 via @MobilePunch

The federal government has charged Omoyele Sowore for “conspiracy to commit treason”. In the suit dated September 19, the government accused Sowore of granting an interview which purpose caused insult on the person of the president of the country.
https://t.co/eVHaCcM60f

“…the government accused Sowore of granting an interview which purpose caused insult on the person of the president of the country.”

You guys are not alright inside that Villa. Seriously? Next thing may be accusing Buhari’s critics of blasphemy. 😂 https://t.co/dcwi3A8XVv

The number of insults Trump as received since becoming president of USA is way too much compared to what Sowore said to Bubu. And nobody was jailed,prosecuted nor arrested. This shows how backward and low our govt is.

On this Sowore case,
in as much as the @MBuhari is wrong in a sense,
It’s safe to say that Sowore brought this on himself…

Not just by “insulting”, but also by his past sins to @GEJonathan.
Sowore is just getting a taste of the seeds he has sown.

Sowore is tired of the way the country is like the rest of us, he wants a change thats all he is saying.. is this not democracy again? But nitwits like u guys wants him jailed for no reason… No wonder Nigeria is the way it is

Sowore pleads guilty of all these charges, but before you jail him, prove to us that these actions are against the tenets of democracy!
Full blown dictatorship has really taken effect ! #RevolutionNow #FreeSoworeNow #FreeAllThePrisonersOfConscienceNow pic.twitter.com/YvJq1QcHl9

Las las, we’re heading towards Military Regime. If you talk, you die! You remain silent, you also die! Not all President will be like ex President @GEJonathan, i please for @YeleSowore unconditional release. Sowore wanted CHANGE! https://t.co/z5s0PqSSHp