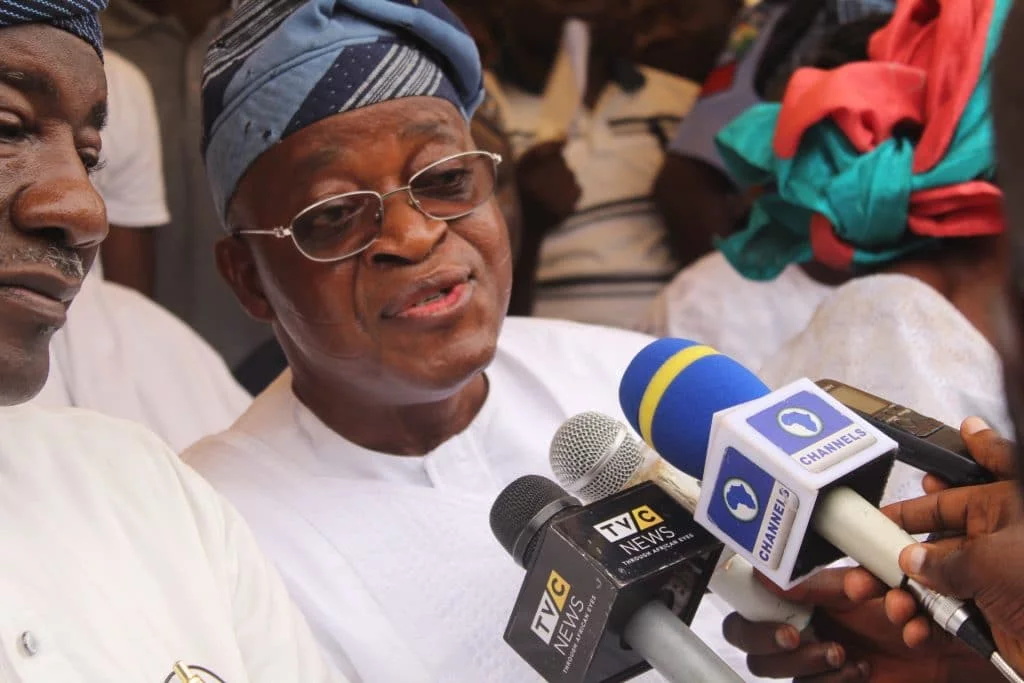 Osun Governor, Adegboyega Oyetola, on Wednesday in Abuja, the nation’s capital, X-rayed the country’s security challenges and concluded that one sure way to confront them headlong was to decentralise Nigeria’s current centralised policing system to meet the nation’s current realities.

While acknowledging the efforts of the Federal Government through the Police at establishing Community Police, the Governor noted that the intervention was inadequate as it is still being controlled from the centre, adding that the constitutional provision that assigns the role of Chief Security Officer to governors ought to have provided corresponding empowerment and control of the security agencies to the same governors to enable them to perform their responsibilities as Chief Security Officer effectively.

Oyetola spoke at the 2nd Annual Colloquium of the Sultan Maccido Institute for Peace, Leadership and Development Studies, University of Abuja.
The governor identified the sources of insecurity as “poverty which creates a gulf between the rich and the poor; inequitable allocation of resources which pits one region against the other; injustice which makes offended parties resort to self-help and consequently take up arms against state; illiteracy which makes innocent citizens willing tools at the hands of unscrupulous elites and elements; youth unemployment which makes able-bodied; and educated youths susceptible to crime, among others.”

He noted that security, governance, and sustainable economic development are the tripod upon which a nation’s prosperity and wellbeing stand, adding that security is the facilitator of the other two factors. He further said criminality has no religion or ethnicity.

While insisting that Amotekun is a child of necessity, Oyetola said the security arrangement is complementing the convention security agencies to effectively tackle armed banditry, kidnapping, armed robbery among other crimes.

He said Amotekun became necessary because “the nation’s conventional security agencies are overstretched and sorely underfunded. The Police once confirmed the sorry state of its manpower when it said the Force needed 155,000 additional hands to effectively police the nation. The nation’s security agencies as presently constituted are too centralised and too far from the grassroots to adequately provide the required security for the nation. Worse still, they are unfamiliar with the terrains where crimes take place. It is our belief that our people understand the topography of their communities more and can govern them better.

“Our recent experience where the attempt to confront armed banditry headlong in the North resulted in their incursion into the South West and other regions that were erroneously perceived to be immune from the insecurity challenge is proof that each region has to be adequately policed for the region to know peace.”

Oyetola added that “Abraham Maslow identifies security as one the foremost of the seven needs of man. This classification is true for all entities and it means that security is and should be the first desire of man or any entity. The corollary of this classification is that insecurity is the first enemy of man or entity. Experts aver that security is a crucial factor in governance. Security makes governance, business, development, trade, commerce and every ingredient associated with governance possible and predictable.”

While noting that security holds the master key to planning, governance and sustainable development as the whole outcome could be jeopardised by insecurity, the Osun Governor was quick to add that the government at all levels must not be left alone in the fight against insecurity in the country.

Oyetola therefore called for collective and concerted efforts to deliver the security that we desire as a nation as a people.

He said, “Our recent experience in which insecurity has challenged education, peace, economy and other spheres of life has laid credence to Abraham Maslow’s emplacement of security as one of the foremost in the hierarchy of needs. This realisation underscores the need for our leaders and professionals, including traditional rulers, political leaders, academics, religious leaders and corporate leaders to constantly collaborate to brainstorm on ensuring peace in the nation.

Security breeds peace, economic and other developments, political stability and good governance. The converse of this is that insecurity is a destroyer of these desirable indices.

“As a people, we must realise that it is only in a safe and secure environment that optimal local commercial activities can take place; foreign investors can be attracted; goods and services can be provided; infrastructure can be built and maintained; public service can be delivered, and social and political activities can take place peacefully. Therefore, the quest for a sustainable peaceful society must be prioritised as the collective responsibility of all citizens.

“Delivering security is not a task for the government alone. Corporate bodies and Non-Governmental Organisations need to partner with government to achieve success. Business thrives in an atmosphere of peace. Business concerns must join government to restore peace to the regions of the country.”

Explaining the need to involve Traditional Rulers in tackling the nation’s security challenges, the Osun Governor said, “For proper security of lives and property of our people and the prompt containment of growing challenges, we must inevitably now engage our traditional institutions.

Governors particularly cannot afford not to look in the direction of the traditional institution. This is because every conflict is local and as such, traditional institutions cannot be left out of the scheme. Traditional rulers know their people and also have better strategies for engaging them.  Therefore, we must ride on this to be able to protect our nation from implosion.

“Aside from ensuring that adequate funding is made available to this important institution to run efficiently, our administration considers them as critical stakeholders who must be regularly engaged and embedded in our inclusive governance framework. This approach has yielded invaluable gains in our determined quest to protect the lives and properties of our people. Today, thanks to this invaluable partnership, Osun is widely regarded as one of the safest states in Nigeria.

“Many of you will recall that sometime ago, specifically, early in our administration – at the height of the farmers/herdsmen debacle in the country – there were indeed flashes and skirmishes of armed banditry in Osun, as it was in other parts of the country. However, in our own case, this lawlessness was promptly nipped in the bud, as we leveraged the firm grip of local authorities, the dynamism of our security agencies, and the rallying of critical stakeholders across the State.

“Our Administration organised town hall meetings in all communities under the leadership of our traditional rulers to brainstorm on how to mitigate crisis in those communities and to ensure peace and good neighbourliness. We also leveraged on our existing Committee on Peaceful Co-existence between Bororo/Fulani and Farmers to resolve issues between herders and farmers to ensure smooth relationship between them.

“In our current situation, some of our traditional rulers have proactively intervened in averting conflicts in the Gold-rich zones of the Ife-Ijesha axis by managing the heavy influx of artisanal miners threatening the absorptive capacities of the local communities. This is further enhanced by a Government-backed multi-stakeholder committee devoted to settlers and transhumance issues.
Let me also add here that the preliminary collaborative efforts of the South West governments and the traditional institutions birthed the idea of Amotekun.

“During the novel EndSARS protest which was unfortunately hijacked by hoodlums, the traditional rulers intervened to put the situation under control. Our government also involved them in all our engagements with the youths in the aftermath of the protest.”