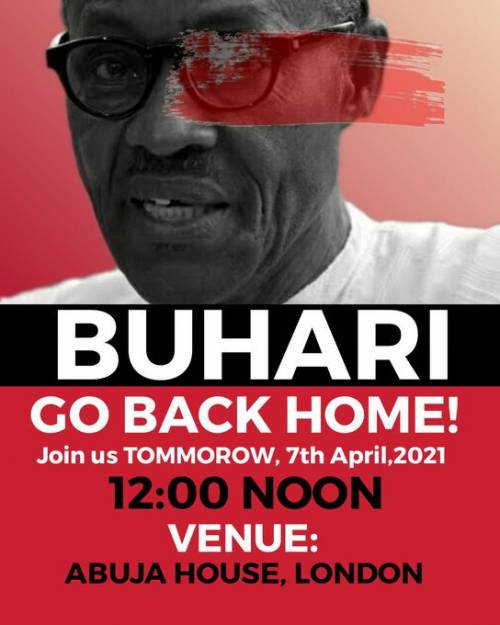 Omoyele Sowore, a human rights activist, has reported that some people are planning a protest against President Muhammadu Buhari’s medical trip to London, United Kingdom.

Sowore, who revealed the protest on his Twitter account on Tuesday, said it would take place on Wednesday at Abuja House in London.

He claims this is to entice the President out of London so he can get his medical check-up at the “world-class” Nigerian Hospital he created.

He tweeted, “Mass action in London tomorrow against Aso Rock’s mannequin @MBuhari he must be chased out of London to return to do his medical check-up at the world-class hospital he built in Nigeria! They’ve paid £75 to shameless Nigerians in London to come but they’ll be outnumbered.”

SaharaReporters previously disclosed how groups in the United Kingdom allegedly financed by the presidency cabal staged a counter-protest in favor of President Buhari.

Every participant in the pro-Buhari rally will be paid £75 (approximately N40,000) – a protest that is being funded to silence Nigerians demanding that Buhari return home to resolve the country’s worsening security and health crises.

A source said, “The Federal Government is organizing a pro-Buhari rally in London on Wednesday. Those that participate will be well compensated.

“A few nights ago, I got a call from a close friend asking if I could assist in locating people who could attend a pro-Buhari rally because I have access to a small database as an event promoter. The pro-Buhari rally will take place on Wednesday from 12 p.m. to 3 p.m., and it will cost £75 per person.

“It disgusts and depresses me so much that I can’t even bring myself to do it.” This demonstrates how dishonest these leaders are, and I pity those of us abroad who are able to do such things for the sake of money.”

On Friday, a crowd of Nigerians gathered outside Abuja House, 2 Campden Hill, Kensington, London, to demand that Buhari, who is currently on medical leave, return home immediately.

Reno Omokiri, a Nigerian broadcaster and former presidential aide, said the protesters gathered with the aim of “chasing the president back home” in a video posted on his verified Twitter account.

“The cops arrived, but #HarassBuhariOutOfLondon proceeded. He tweeted, “A scared @MBuhari declined to come.”

Buhari left Nigeria for the United Kingdom on Tuesday for a medical checkup.

Sowore had previously urged Nigerians in the United Kingdom to occupy the London hospital where President Buhari would undergo medical examinations.