Platforms Africa, a renowned pan-African media organization, has also learned that Halliburton Co., one of the world’s largest oil services companies, which was called to clean up the leak, may withdraw out of the deals at any time. A unit of the firm hired to help seal the well head and Aiteo were unable to reach an agreement on payment conditions, and the firm has formally notified Aiteo of its intention to abandon the deal.

For the past 33 days, the asset that Aiteo purchased from a partnership led by Royal Dutch Shell Plc in southern Nigeria has been spilling its contents.

Well head at Aiteo’s permit has been leaking since Nov. 1, according to Nigerian advocacy group Environmental Rights Action, which visited the site on said date

The rupture is releasing oil, fumes into the surrounding area

The field produced about 27,000 barrels per day in 2020, according to information published by NNPC

Aiteo has so far recovered at least 3,000 barrels of emulsified crude oil from the surrounding river

Spills are from a non-Producing well on OML 29 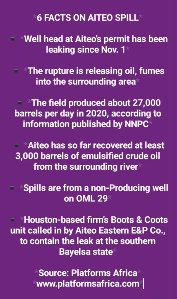 Already Haliburton unit, Boots & Coots, has, according to sources at the company, informed Aiteo if its decision to pull out citing inabiloty to reach agreement on fiscal terms.

Aiteo spokesperson did not respond to enquiries by Platforms Africa on this.

The Lagos-based Aiteo said on Nov. 20 that it expects the leak to be “abated and significantly diminished” by the involvement of Halliburton’s specialists.

The Houston-based firm’s Boots & Coots unit was called in by independent producer Aiteo Eastern E&P Co., to contain the leak from a non-producing well in the southern Bayelsa state, Bloomberg reported, quoring a spokeswoman who confirmed by email.

Oil has been leaking “under high pressure” since Nov. 1, according to a statement on Wednesday by Nigerian advocacy group Environmental Rights Action, which visited the site on Sunday.

Aiteo oil spill
With this, the spill and its accompanying environmental pollution may have hit 33 days.

Platforms Africa reports that the rupture on the field that’s located in mangrove forests has been releasing crude into the surrounding river, and fumes into the air.

The field produced about 27,000 barrels per day in 2020, according to information published by NNPC. Output, which had dropped to about 9,500 barrels a day by July, is transported via a pipeline to Shell’s Bonny export terminal.

Meanwhile,an estimated two million barrels of crude has reportedly been spilled into the river, polluting the flora and fauna of the area.

The Bayelsa State Governor, Senator Douye Diri, on Wednesday returned from visiting the oil spill site in Nembe Local Government Area of the state, describing it as the worst he had seen in his lifetime.

As of Wednesday, the Bayelsa government said the spill that, it claimed, began November 5 was still ongoing. Foreign media reported, quoting, Civil society and environmental protection groups in Niger Delta, that the spill began on November 1 but was officially confirmed on November 5.

In a statement issued by his Chief Press Secretary, Mr Alabrah, the governor, who expressed shock over the quantity of crude that has been spilled into the environment, called on the Federal Government and operators of the oil field to immediately take action to stop it.

According to him, the prolonged oil spill into the water and air had an immediate and long term effect on the health of the inhabitants.

While assuring the people that appropriate measures would be taken to seek redress, he noted that the quest by oil firms to make money would not be at the expense of the lives of the people.

Is Sanwo-Olu Trying To Walk On The Blood Of Lekki Tollgate Victims? By Israel Ojoko

From Chiamaka Agim To Madox: Zenith Bank Again On Data Breach
18 hours ago