The South East Governors’ Forum has condemned the assassination of a former political aide to Goodluck Jonathan, Ahmed Gulak, in Owerri, Imo State. 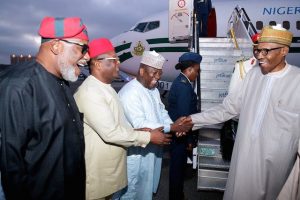 News Direct recalls Gulak was shot dead by unknown gunmen in Owerri, Imo State on Sunday while he was on his way to Abuja from Owerri.

Explaining details of how Gulak was killed, the Imo State Police Public Relations Officer, SP Bala Elkana in a statement on Sunday said Gulak didn’t inform the Police or any other sister security agency of his movement.

However, some quarters are insinuating that IPOB is responsible for the killing of the top Northern politician but the group issued a denial.

Reacting in a statement by his Special Assistant on Media and Publicity, Francis Nwaze, the chairman of the forum and governor of Ebonyi State, David Umahi, described the murder Gulak as a national catastrophe.

The governor condoled Gulak’s family, the Adamawa State Government and Nigerians in general.

He said: “It is with a rude shock that we received the news of the unfortunate death of Alhaji Ahmed Gulak in the hands of the senseless unknown gunmen.

“We, on behalf of the people of South East, condemn the act highly and we charge security agencies to immediately deploy their officers and men to arrest the perpetrators and make them face justice, we, however, pray to God to grant the deceased rest in eternity”.

JUST IN: One Killed, 200 Islamiyya Students Kidnapped In Niger