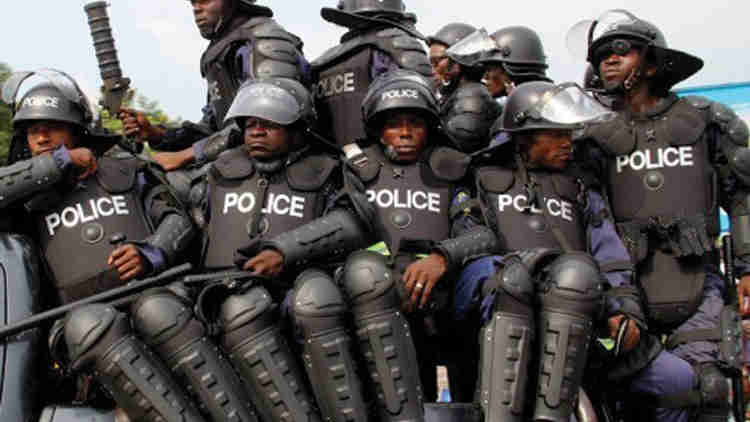 The Forum of Chairmen of  Nigeria Political Parties on Monday said security agents and politicians should be held responsible for the violence and other electoral fraud witnessed during the just concluded Bayelsa and Kogi states governorship elections.

Addressing journalists after a review of the conduct of the elections in the two states, the forum also called for an urgent conclusion of the process of the amendment of the Electoral Act, introducing electronic transmission of results straight from the Polling Units to a central database.

Chairman of Action Alliance (AA) Barr. Kenneth Udeze, who read the communique reached at the end of a two-day meeting held by the chairmen said security agents did not live up to their expectations as thugs had a field day

The forum which comprises over 60 party chairmen had in attendance during the press conference, national chairman of NUP, Hon. Perry Opara; chairman of ACD, Alhaji Adamu Takai, amongst political party chairmen.

The chairmen noted that the two election was a serious dent on the progress made so far in enshrining free and fair elections.

Barr Udeze during his briefing stated that,  “The failure of the elections was not caused by administrative lapses or inefficiency of the INEC; but by the actions of security agencies who compromised the process and aided political thugs to disrupt the entire process and cart away electoral materials.”

While speaking further, Udeze, stated that despite the thousands of security personnel deployed to Kogi and Bayelsa for the elections, it can be stated that thugs had a field day particularly in Kogi State, where their activities played a major role in determining who was eventually declared to have won the election.

He decried a situation where there were no reports of any arrest that were made on polling day by the police to stop the gun-wielding thugs who stormed many polling centres.

He noted, “The Collation Centres were made inaccessible to duly accredited observers and agents of other political parties except those that were allowed by the thugs; while over 35,000 policemen watched helplessly and haplessly.”

He stated that while they — Chairmen of the political parties who are the sponsors of the candidates for these elections desire free and fair elections,

“The Forum of Chairmen of Nigeria Political Parties also concludes that the role of security agencies particularly the Nigeria Police and the Nigeria Army during the November 16th Governorship elections Kogi and Bayelsa states were largely reprehensible.

“Men in police uniforms were seen aiding thugs to carry ballot boxes and other materials from the centres and abducting polling staff”, he said.

He that  the 35,200 policemen deployed to Kogi State were all either standing by watching or were active participants guarding the thugs to carry the election materials and disrupt a hitherto peaceful and well organized process.

He, however, noted that it was disheartening to hear the Inspector General of Police announced to journalists that the Police got intelligence about the plans of politicians to sew Police uniforms but rather than announce what the Police did to checkmate these criminals and even arrest them for possible prosecution, he announced that the Police made tags for further identification of their officers.

According to him, He did not announce anything else the police did. He has since not announced the arrest of any of the persons he referred to as fake policemen who were on rampage and heavily dented the credibility of the election.

“The Inspector General still owes Nigerians a lot of explanation on why the 35, 000 policemen in Kogi were helpless and could not stop these thugs alleging that security agencies colluded with political thugs and this collusion is at the highest levels of the security echelon.”

The Forum further explained that it is following from these analyses that it resolve and demand as follows: the failure noticed in the Kogi election, the killings, maiming and destruction of property are blamed on the security agencies.

The Forum, however, urged the Federal Government to set up an inquiry into the circumstances that led to the over running of 35, 000 policemen by a motley crowd of political thugs.

The Forum also demanded that the Inspector general of Police be investigated to ascertain whether truly 35, 000 Policemen were deployed to Kogi State as the activities of the thugs does not support the fact that they should have that number of Policemen, adding that the investigation should also unravel the quantum of allowances approved for the Police and to whom they were actually paid.

The Forum further noted that Nigerian politicians seem not to have learnt any lessons from the happenings of 1983 which led to the collapse of the 2nd Republic in 1984.

“The arbitrary use of Federal force and the loss of confidence in the Courts led people to seek all sorts of self-help which culminated in the overthrow of that administration by the military.

“All the indices which led to the fall of that Republic are here again staring us in the face still being orchestrated by politicians.

“ It is clear to us that Nigerian politicians seem not to have learnt anything, in fact, Nigeria politicians have not learnt anything from our history. The desperate quest to compromise institutions of state must be condemned”, the forum stated.