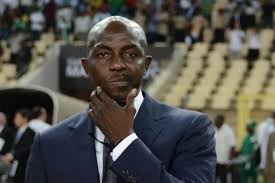 Former Nigeria national team coach Samson Siasia has been banned from the game for life following a match-fixing probe by world governing body FIFA.
FIFA said in a statement on Friday that the adjudicatory chamber of their independent Ethics Committee found that Siasia was “guilty of having accepted that he would receive bribes in relation to the manipulation of matches in violation of the FIFA Code of Ethics.”

The 51-year-old Siasia played 51 times as a striker for the Nigerian national team and later coached various national youth sides before a spell as senior coach in 2016.

The case is the latest to emerge from FIFA’s long-running investigation into the activities of Singaporean Wilson Raj Perumal, who FIFA has called a “known match fixer” and who has admitted such activity in several interviews.

FIFA said that he was banned for life “from all football-related activities (administrative, sports or any other) at both national and international level.”

Why we brought El-Zakzaky back to Nigeria — FG