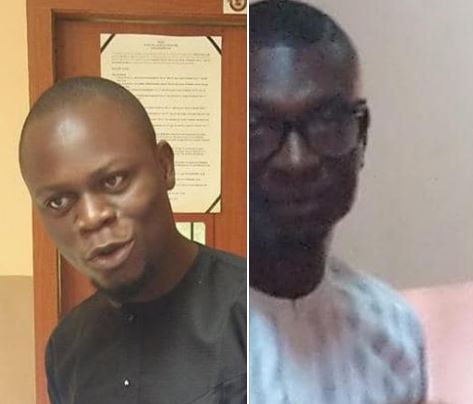 The Lagos Zonal Office of EFCC on Friday, March 29, 2019, arraigned two suspected fraudsters, Feranmi Isaiah Akinluyi and Sogo Akinola, a.k.a Obaje, before Justice Mojisola Dada of the Special Offences Court, sitting in Ikeja on a five-count charge, bordering on obtaining money by false pretence and stealing to the tune of N24, 980, 000 (Twenty-Four Million, Nine Hundred and Eighty Thousand Naira).

The first defendant, Akinluyi, a lawyer, and the second defendant, Akinola, also a lawyer and an employee of 9Mobile (formerly Etisalat Nigeria), allegedly swindled a number of unsuspecting victims by claiming to be into property business.

One of the charges reads: “That you, Feranmi Isaiah Akinluyi and Sogo Akinola (alias Obaje), on or about the 24th June, 2016 in Lagos, within the Ikeja Judicial Division, with intent to defraud, induced Kelechi Okani Darlington to transfer the sum of N9,000,000 (Nine Million Naira) only into your Diamond Bank Account No. 0042435535, on the understanding that the said amount was to purchase a property known and situated on Plot 3, Block 1, Lekki County, Ikota Village, Lagos, which pretext you knew to be false.”

The defendants pleaded not guilty to all the charges. In view of their no guilty plea, the prosecution counsel, Ahmed Yerima, asked for a trial date and urged the court to remand them in prison custody.

Counsel to the defendants, Olugbenga Akinlabi, informed the court that the charge was served on the defendants just this morning in the court premises and that the defendants are standing trial before Justice Oluwatoyin Taiwo of the Special Offences Court, sitting in Ikeja for a similar offence for which they are presently on bail.

The defence counsel, therefore, prayed for a short adjournment to enable him file and serve the prosecution with the bail applications on behalf of his clients. Justice Dada granted the defendants bail and adjourned the case to May 6, 2019 for hearing of the bail applications and commencement of trial.

Tambuwal speaks on working with APC in second term