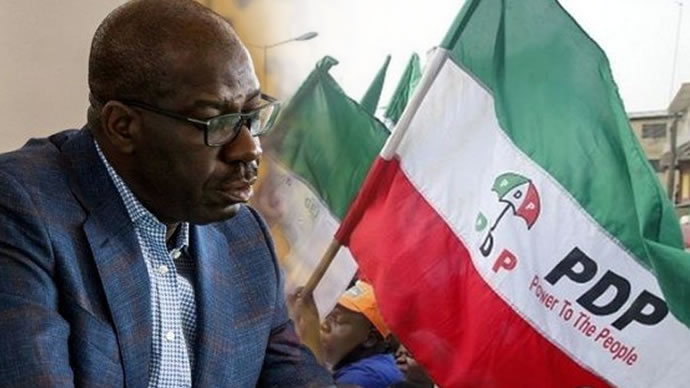 The Edo state chapter of the Peoples Democratic Party (PDP) has amicably resolved the crisis that erupted on who becomes the governorship candidate of the party in the gubernatorial election slated for September 19.

Omoregie Ogbeide-Ihama, one of the PDP aspirants had  filed the suit seeking exclusion of  Governor Godwin Obaseki from contesting in the PDP primary election rescheduled to hold on Thursday, June 25.

Ogbeide-Ihama had prayed the court to disqualify Obaseki who joined the PDP last week, arguing that only aspirants who purchased the party’s nomination forms and were screened within the stipulated time should be allowed to contest in the primary.

However, speaking with our correspondent, a member of the party’s National Working Committee (NWC) who does not want his name in print said the matter has been amicably resolved.

He said the case by Ogbeide-Ihama will be discontinued in court today and all stakeholders, including Governor Nyesom Wike of Rivers have all agreed to deliver Governor Obaseki.

“The Edo matter has been resolved amicably. The litigation in Port Harcourt will be discontinued this morning”.

“All parties agreed to work together to deliver Governor Obaseki at the primaries on Thursday in Benin”.

“The stakeholders were in Port Harcourt last night at a meeting hosted by Governor Nyesom Wike of Rivers state. Accommodating various interests in terms of portfolio topped the agenda at the meeting”, he said.