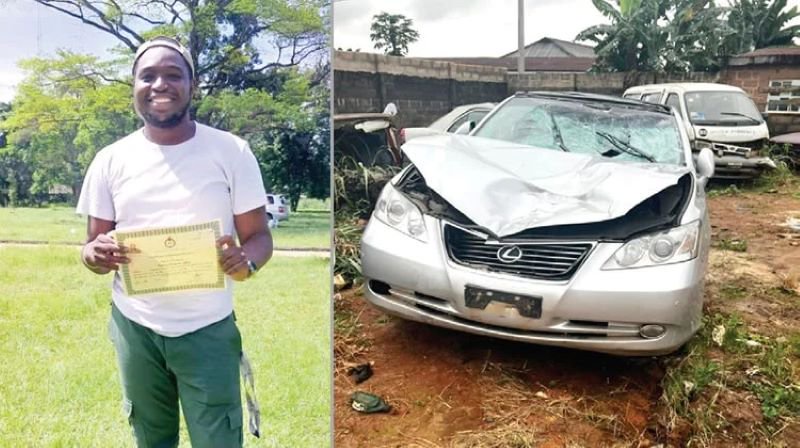 The incident happened on Tuesday when the 26-year-old was on his way to a Union Bank branch to wait for his mother, who wanted to make cash withdrawal from her bank account.

The mother intended to give him some money after he concluded plans to travel to Canada for his master’s degree programme.

Uupon getting to Uselu Junction, the petroleum engineering graduate of the University of Benin attempted crossing the expressway to connect to the bank when the yet-to-be-identified motorist, while driving a Lexus car with number plate YAB 985 CL at top speed, rammed into him.

According to PUNCH, Jeffrey’s mother, Fortune said she was inside a vehicle conveying her to meet her son when she observed people clustering around an accident victim.

She said, “I got down and started telling people to let us help the victim. But on moving closer, I realised it was my son lying down in a pool of blood. I started crying and shouting that people should help me. He was still breathing and people helped me carry him inside a vehicle.

“We quickly rushed him to the University of Benin Teaching Hospital, where we were told that he had died. He was to travel out of the country on August 28 and I was going to the bank to give him money for the travel.

“The youth that assisted me said the boy that killed my son is a Yahoo boy (Internet fraudster) and that his vehicle came from nowhere to knock my son down. If you see the damage on the car, you will think that the vehicle rammed into a truck. I want justice.”

The deceased’s younger brother, Aisosa, said the police had been hiding the identity of the suspect.

He said, “On Tuesday, around 3pm, I got a call from my mum and heard her saying help me, help me before the call disconnected. She called back and said I should be coming to the UBTH because my brother had an accident.

“I was on my way to the hospital when she called and said my brother had died. How the accident happened was that he crossed the Uselu-Lagos Expressway towards the barricade that separated the two lanes for vehicles coming and going.

“Policemen from the BDPA division arrested the suspect that same Tuesday. But when my mum and I went to the police station and demanded to see the person responsible for my brother’s death, the Investigating Police Officer told us the suspect had been transferred to the Area Command on Sapele Road.

“When we got there, we only saw the car and they still didn’t show us the suspect or tell us his name. They are just hiding his identity and we need to know his identity because we want justice.”

Jeffrey’s friend, Samuel Ebosele, alleged that the IPO had been trying to compromise the case, adding that some policemen had been calling the family for settlement.

The state Police Public Relations Officer, SP Chidi Nwabuzor, said the case had been transferred by the Divisional Police Officer after initial investigation to the State Traffic Division, Adesua, where further investigation would be carried out.

“I have been in touch with the DPO of Ugbowo, who confirmed that the case had been transferred to the State Traffic Division where further investigation will carried out,” he added.