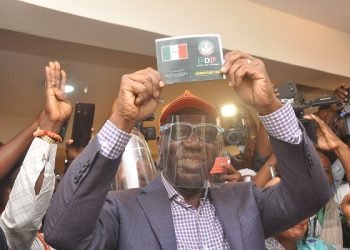 Ahead of the September 19, 2020 gubernatorial election in Edo State, the reelection bid of Governor Godwin Obaseki received a major boost as his party, the Peoples Democratic Party (PDP) received more defectors from the All Progressives Congress (APC) in Oredo Local Government Area.

Amidst cheers and fanfare, leader of the APC in Oredo Ward 3, Comrade Fidelis Owen, led thousands of APC members to the PDP, reaffirming their support for the second term aspiration of Governor Obaseki and his deputy, Rt. Hon. Comr. Philip Shaibu.

Oredo Ward 11 also witnessed mass defection as leaders of the APC, in Oredo Ward 11, Mr. Tony Alile and Mr. Hon Godwin Igbinoba led other leaders, executives and members of the party to the PDP.

Comr. Owen said they were pitching tent with the PDP because of its capacity and the performance of the party’s standard-bearer, Governor Godwin Obaseki.

“We have decided to lead thousands of our members and executives to the PDP to support the governor’s second term bid because of his developmental strides across all sectors of the state. We’re confident that come September 19, 2020, Governor Obaseki will come out victorious.”

The APC Oredo Ward 3 members that defected include 19 ward executives, two local government executives, all political appointees in Ward 3, among several others.

The defected members were received by the leader of the PDP in Ward 3, Prof. Faith Osama-Osadolor and the party’s chairman, Hon. Nelson Ogbonmwam.

Osadolor noted: “I want to welcome our brothers, sisters and fathers who hitherto were in APC but are here today for the burial ceremony of the APC. When one’s child is doing well, we must say it. We will produce unprecedented result for Governor Obaseki on September 19, 2020.

Oredo Ward 11 leader, Alile said: “It has been development upon development in Edo State; even a blind man can see what Governor Godwin Obaseki is doing. The people that are against Governor Godwin Obaseki today don’t mean well for Edo State; that is why I decided with my teeming supporters and all executives and members of Oredo Ward 11 to join the PDP, because of the landmark achievements of the governor.

We want to give him another four years to continue the good work he started.”

Receiving the defectors in Ward 11, the Oredo PDP Chairman, Comr. Oduwa Igbinosun said: “Obaseki has brought so much development into the state; he has tarred so many roads; he has completed so many projects while several others are ongoing and many more have been earmarked for construction. Look at the Secretariat Building, the Samuel Ogbemudia Stadium and many more, it is a joyful moment, and we want to sincerely thank, Hon. Tony Alile and the entire APC executives in Oredo Ward 11, for collapsing their structure to join our party.

“With the PDP, there is no opposition in Ward 11 anymore; what just happened here today is what we are trying to replicate in all wards in Oredo, so that at the end of the day, we will be able to deliver over 80 percent cast votes to Governor Godwin Obaseki.”