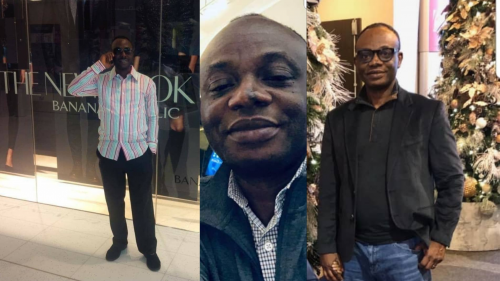 Dr. Kazim Oladotun Oyenuga, the son of a well-known deceased gold merchant in Ibadan, Oyo State, may have cheated two Nigerians out of $134,000, according to documents (about N67 million).

“Kazim that resides at 6508 Sleepy Spring Dr. Plano TX 75024 has become a menace to the society since he had channelled his focus, knowledge, and passion to defrauding personal individuals, wholesale vendors, insurance companies, landlords, employees. He has carved a niche for himself as a serial fraudster.

“He is an impostor, pretending to operate pharmacy practices to the society. However, his entire business motive is to defraud, steal and destroy another innocent,” Olufemi Dominic who was allegedly defrauded of $34,000 in 2020 told SaharaReporters.

Olufemi accused Kazeem’s mother, Saudat Oyenuga of being an accomplice in his ‘fraudulent business operations’.

“The duo actively collaborate in diverse fraudulent schemes to engage, defraud, and instill fears and barriers to silence their victims, using all mischievous and fraudulent means.

“In January 2020, Saudat Oyenuga and Oladotun Kazim Oyenuga conspired to defraud me. They conspired using manipulative attempts to extort monetary funds from me. They invited me to their family home in Plano, Texas, USA where I met the duo.

“After the casual and informal meeting, Kazim told me to partner with him on one of his Pharmacy stores, IMEDSPLUS THE I-LAB (MEDICINESPLUS LLC) on the grounds that the business operations were becoming too overwhelming for only him to handle by himself. In addition, Kazim expressed that his recent inability to singlehandedly juggle the operations of his multiple stores had led him to lose some money after forfeiting one of the pharmacy stores as a result.

“I initially declined the business offer, on the note that I and my wife were just in the process of opening our own new pharmacy store around the same time. However, Kazim never gave up asking and begging as a result of his desperation to get me to come to terms with his business offer. After several pleas, placations and pressure from Kazim for me to come on board with him, I agreed on the condition to probationally join the business to ensure the actual state of the business, thoroughness, and the validity of the business as Kazim had disclosed.

“However, Kazim insisted that it was highly imperative for me to also commit some money into the business. Just as mentioned in his own word that I needed a skin in the game in order to ensure that I would be willing to uphold the values and interests of the business.

“He initially demanded the sum of $100,000.00 (about N50, 000, 000), but I told him I could not afford such considering his other business engagements. So, we agreed on an initial payment of $20,000.00 (about N10, 000, 000 to get things started. Within a week of my financial commitment and engagement with Kazim’s business, Kazim approached me about some pharmacy equipment he wanted to sell and mentioned that I might be able to use them to jumpstart my other pharmacy business.

“Although I declined to purchase the equipment, but after much pressure from Kazim, I offered to pay him $14, 000.00. (about N7 million). Upon Kazim’s receipt of payment, he sent the equipment to me only for me to discover that the equipment was missing on all accessories in addition to being obsolete plus the fact that the equipment would not qualify to meet the stipulations of the Texas State Pharmacy Boards and the Drug Enforcement Agencies.

“I rejected the equipment and Kazim apologised and then promised to refund the $14, 000.00 (about N7 million). Within one and half months of running IMEDSPLUS THE I-LAB (MEDICINESPLUS LLC), Kazim failed to provide sufficient proper documentations for the business. In addition, I observed two newly pharmacists had left within two weeks that they were hired.

“Finally, it was the third pharmacist that was able to get down to the root of the issues. It then became quite obvious that the business did not exist, and everything was just a scam. I then approached Kazim and he feigned ignorance and shamefully apologised for misleading me.

“Since April 2020, Kazim has been making numerous excuses for his inability to pay the money to me. Even though, his flamboyant lifestyles still reinforce the fact that he has the means to pay, he deliberately chose not to pay back. He later boasted in a text message to me that he had been defrauding people for ages.

“This declaration forced me to do some background checks into his dealings and it was then I found out that Kazim is a serial fraudster that has somehow getting away with defrauding people, financial institutions, pharmaceutical drug wholesalers, employees, landlords, etc.”

He continued, “He is still on the street as a white-collar criminal, walking conveniently, living flamboyantly. I recently realised that he just bought two exotic Range Rover cars (over $200, 000) for himself and wife. I then decided to raise delegates to discuss my concerns with his family members from his father side, having found out that his mum and siblings are with him in the business of defrauding people.

“This infuriated Kazim for being exposed as a fraudster to his family members. His concern and desperation of his escapades as a fraudster forced him to hire off duty police officers, in an unprecedented and unprofessional manners to kidnap my younger brother that resides in Osogbo, Osun state, believing that would help instill fear to silence me.

“The attempt to kidnap my brother on behalf of Kazim failed. However, these police officers from Scorpion Squad, Akure, Ondo state maltreated my brother’s neighbors, arrested two of the neighbours for no apparent wrongdoings and forced them after a couple days to pay their hard-earned money for bail. In addition, they vandalised my bother’s house and stole a few of his personal assets.”

Also speaking to SaharaReporters, another US-based pharmacist who preferred to remain anonymous claimed Kazim defrauded him of $100,000.

“I was defrauded of $100,000 by him. I know someone he defrauded of $250,000 as well. He has mastered the art of his business, by registering and opening multiple pharmacy businesses either simultaneously or one after the other.

“He sets up the business in some of the affluent and upscale neighborhoods around Dallas (DFW) metroplex. A few of the businesses Kazim had operated are: Imedsplus Integrative, Pharmacompoundia, Care Tecture LLC, Medicineers at USPharmaceutica (https://www.usmedicineers.com/) etc.

“The model is to just create a persona of and façade of doing legitimate pharmacy business to potential victims. He then combines this façade with his presentation of his impressive academic backgrounds to cajole his victims to engage in business relationships with him.

“His popular slogan every time he engages a new victim in business is “I want you to have a skin in the game”. The moment his victims get on board through their financial commitments is when every prospect and potential for success becomes the victim’s nightmare.

“He would change the story that the business plans had failed to work out as planned.

“Kazim has a model of buying several expensive equipment and pharmaceutical products from wholesalers in the USA on credit and deliberately failing to pay back at all times. This same Kazim would deliberately default on the salaries of several employees and marketers that have worked for him.

“He rather lives in an expensive and upscale neighbourhood for free by ending up defaulting on the rent, to the point in which the Landlord would sue him so he could get him evicted.

“The same instance is in the pharmacy stores he rents. He is used to not paying the landlords. Several lawsuits and legal battles against him have become the order of the day in his life. However, he is not perturbed because he had craftly mastered his business and surrounded himself with attorneys to help him navigate all legal battles.

“It is normal to assume that he would be loyal to his legal team that represent him in all his lawsuits. Surprisingly, Kazim also served his lawyer a dose of his medicine by also defaulting on his legal fees, hence making his lawyer also join the league of  victims that Kazim had gotten away with their money.

“So, the lawyer himself was forced to sue his own client because of the default. Kazim has found solace in being sued by his victims, because it seems like the easiest approach to always get away with every fraud. After all, the victims would be responsible to pay a lawyer and deal with the stress and rigors of dealing with the courts, while Kazim only needs to send his defense lawyer a fraction of what he had defrauded the plaintiffs.

“He will oftentimes appeal cases with the judge or use deceptive ideas that he accepts he owes his victim. However, he is unable to pay because of his financial constraints. Contrarily, his deception for his financial constraints is not a hindrance for the flamboyant and wasteful lifestyles that he lives with his family. Kazim recently acquired two Range Rover cars for himself and the wife.

“Kazim has been quite lucky to surround himself with accomplices that are dedicated and loyal to him. His wife, Candace Oyenuga has been a strong support of his business because of the benefits and personal gains she gets. In addition, his direct siblings from the mother side have unflinchingly being in support of him and they have been highly involved in indulging him in his dealings.

“They have been highly responsible for recruiting victims, deflecting, and causing confusions about their brother’s escapades as a fraudster. Saheed Oyenuga, Kazim’s younger brother is actively helping him to recruit new victims from Nigeria, while Zarat Oyenuga is busy being the spokeswoman for Kazim in Nigeria.

“Taibat Oyenuga Bakare, another younger sister of Kazim is another strong advocate of Kazim in the USA. Mrs. Saudat Oyenuga, who resides in Eleyele, Ibadan is highly responsible for providing spiritual supports and guidance to ensure Kazim escapes or evades all the troubles he has amassed upon himself over the years in his fraudulent schemes.”