Nyesom Wike, the governor of the state of Rivers, and at least 17 Peoples Democratic Party (PDP) contenders for governor met behind closed doors. The candidates from Sokoto, Jigawa, Kaduna, Katsina, and 13 other states visited Governor Wike at his country residence in Rumueprikon, Obio-Akpor local government area, according to a story in The Nation.

According to reports, the candidates arrived in Port Harcourt around 8 p.m. for the meeting, which takes place as the PDP is in the midst of a crisis before the 2023 election.

According to reports, the PDP governor candidates went to Governor Wike and begged him to forgive the party’s presidential candidate Atiku Abubakar, the national chairman Iyorchia Ayu, and other PDP leaders who had upset him. 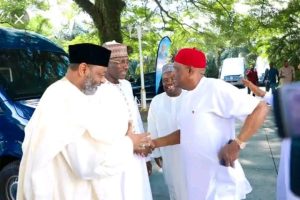 The Nation, however, stated that it could not be ascertained whether they were sent to beg Wike by the party, Atiku or they came on their own volition.

The newspaper cited a source as confirming the development saying the meeting started around 8:30pm. The PDP governorship candidate in Jigawa state, Mustapha Sule Lamido, is one of those at the meeting.

Other PDP governorship candidates in attendance include that of Kaduna state, Isa Ashiru, and Katsina state, Yakubu Lado Danmarke, among others. The meeting is currently underway, according to Leadership.

Earlier, Legit.ng reported that Governor Wike alleged threats to his life amidst the crisis rocking the Peoples Democratic Party (PDP). The Rivers state governor, however, said those plotting to kill him will die first before they get to him. Wike made the statement on Tuesday, September 6, when he inaugurated a new Faculty of Agriculture for Rivers State University and commissioned the construction of residential blocks for the faculty in Etche local government area of the state.

Those Plotting To Kill Me Will Die First- Wike