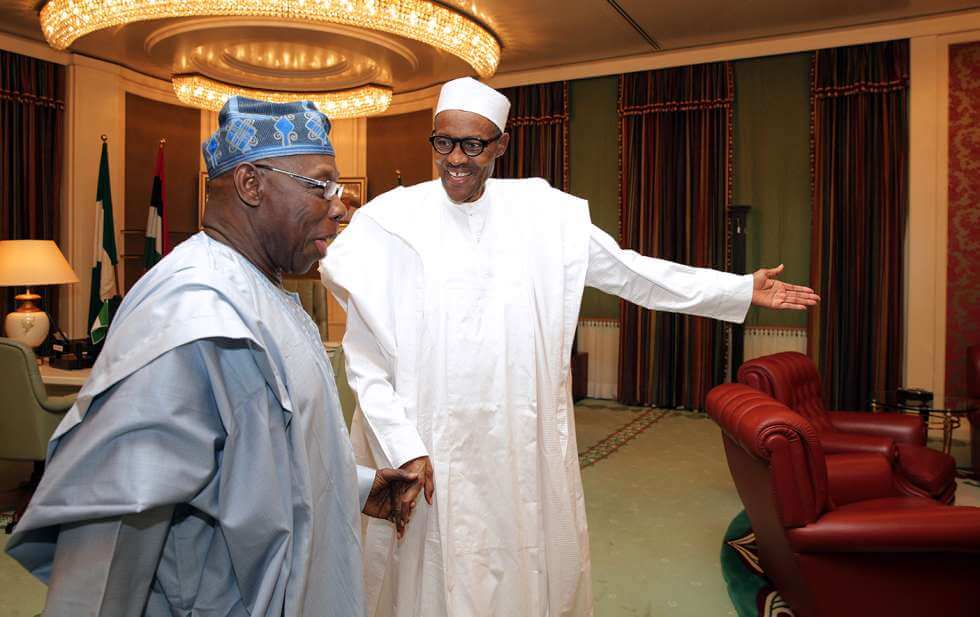 President Muhammadu Buhari, as a sitting president, “bowed” to greet former president Olusegun Obasanjo during a meeting of the Council of State at the Presidential Villa, Abuja.

This was revealed by President Buhari’s senior media adviser, Femi Adesina, in an opinion article on Friday.

Adesina was trying to explain how civil and humble his principal could be when he gave an example of the incident that took place in 2018.

The presidential aide said Buhari showed respect to Obasanjo at the Council of State meeting despite the fact that the former president had just written a letter criticising the administration of his boss.

Adesina said Buhari, however, shocked everyone when he “fired on all cylinders” in his October 1, 2020, independence day speech by attacking the country’s past leaders from 1999 to 2015.

He said, “President Buhari is a civil man. Too civil at times, if you ask me. Some people launch bilious attacks against him and the government he leads, simply because they got ejected from their perch as permanent landlords of the country. He tells you not to respond, and when he finally gives the permission, he says do it in the most civil manner possible. But in the National Day broadcast, the man came smoking.

Adesina quoted Buhari as saying: “Those who in 1999-2015 presided on near destruction of the country have now the impudence to attempt to criticize.”

He said, “Are the gloves off? Just some jabs, if I know this President. Too civil, almost to a fault. In early 2018, a professional letter writer had launched his usual assault, which he had done against all sitting Presidents in the country since 1979. And about a week or two later, the National Council of State meeting was summoned for the State House. With his pen still dripping vitriol, nay blood, the letter writer showed up.

“It was a matter of interest for us all in the Council Chamber, venue of the meeting, to see how President Buhari would react, coming face to face with the man with the poisoned pen. Absolute courtesy. He bowed to greet him. And throughout the meeting, whenever the man indicated that he needed to speak on any issue by pressing the microphone on his table, the President would say: “Yes sir.” Really, some people are respectful, almost to a fault. They still chase rats to people who they know are chasing snakes to them,” said the presidential aide.

Adesina, in apparent response to Obasanjo’s recent statement that the country was fast becoming a failed state under Buhari, said some “permanent critics” of the president were bent on making the citizens believe that his principal was responsible for the division and calls for secession in the country.

He noted that President Buhari, in his speech, admitted that unity, security, economy, amongst others, were challenges facing the country.

Adesina, however, said: “But our forebears knew that the country was not one, and needed to be meshed and solidified.

“That was Nigeria from the very beginning. Let no revisionists come to paint the unreal picture of an idyllic country, which has now been shot to ribbons. No, right from the outset, Nigeria had needed unification, and success at that quest had always been relative.

He added that, “Should we then throw up our hands in surrender, and say we live in a failed or failing state, as some permanent critics would have us believe? Not by any stretch of the imagination. It was time to build and pull TOGETHER, which is the theme of the 60th anniversary celebration. Now is the time to chart where we need to go, and how to get there.

“Curiously, those who romanticize a Nigeria that had always needed constant unification are the very ones that cause the greatest problems today. They claim our diversity has not been well managed, while they are the very ones whipping up divisive tendencies and narratives.”