On Friday, students at Tai Solarin University of Education (TASUED) protested the kidnapping of their Students Union President, Sodiq Rabiu, and others by Nigerian Army soldiers.

Rabiu Sodiq was arrested on Thursday, according to SaharaReporters, for interfering in a dispute between students and military.

According to sources, he and a large number of his colleagues were apprehended by soldiers stationed at Ilese Barracks. 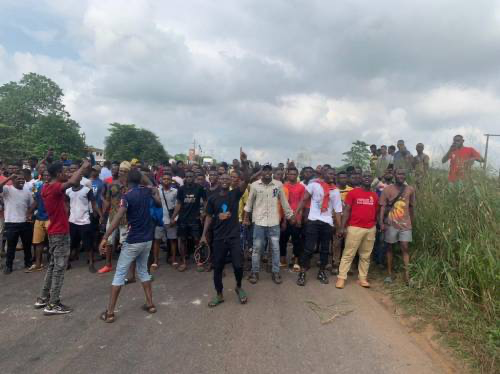 A student leader said, “A few hours ago, uniformed men of Nigerian Military invaded the students’ community of our dear University and melted absolute injustice, extortion and assaults on peace-loving students.

“TASUEDITES who are going by their legitimate and calm businesses were cornered at CONOIL Filling Station, the Express Road that leads to the university’s second gate. They were arrested and assaulted for no reason. To make things worse, the soldiers asked students to bail themselves with N50, 000 and those who could not do that were detained and taken away (most likely to the barracks).

“The Senate President was also severely injured and many comrades were beaten, whipped and abducted by the military men. The Students’ Union abhors this act in its totality, very displeased and frowns on the reaction of the custodian of the university to the matter when contacted.

“As at the time of making this statement, the President of the Union was still in the custody of the military men. Very assertively, the Students’ Union has declared lecture and exam free day tomorrow, Friday, October 29, 2021, to press home this unjust exploitation and assault. This is a total embarrassment and threat on our university community as a whole, and we will not let it go unchecked.”

“Essentially, despite sporadic shootings at the peaceful students at the express and within the university communities, there was no gunshot injuries while we have video proofs of live ammunition used at the scenes.

“However, scores of students were brutalised and injured, including the Senate President. Meanwhile, the President is still in custody at the Ilese Barracks with other students. And we shall together make effort to release those still in the custody of this disgraceful and embarrassing men of Nigerian Army,” the student leader added.

JUST IN: Former Kano Governor Speaks on Defection from PDP to APC ahead of 2023