Some religious extremists in Borno State have threatened to kill a young woman named Naomi Goni, accusing her of insulting Prophet Muhammad (SAW) on Facebook.

NEWS DIRECT has learned that one Abdulmajid Tanko Izge, who claims to be the President of a group called Borno Youth Support, is supporting the threat.

He promised Naomi that she would receive the death penalty.

The threat from Borno radicals comes as the country continues to grapple with the gruesome murder of Deborah Samuel, a 200-level Shehu Shagari College of Education student in Sokoto State, by a Muslim mob made up of her classmates last Thursday.

The incident has continued to attract nationwide condemnation and the police have arrested two suspects – although a protest by some Muslim youths over the arrest on Saturday turned violent in the state and forced Governor Aminu Tambuwal to impose a 24-hour curfew.

In the Borno episode, SaharaReporters learnt that the police had taken Naomi Goni into custody over the death threats by the Jihadists.

He added, “Naomi you must face the consequences. We will continue raising our voice until action is taken. #Findnaomigoni.”

A check on Facebook also showed some northerners calling for her death.

“The punishment for blasphemy is death! in most religions including Christianity. Respect people’s religion. It’s simple,” one Farouq Umar Farouq wrote.

Speaking to SaharaReporters, a security source said Naomi had been taken into custody by the police.
“She’s currently under detention and denied making the post; she said her account was hacked after she gave birth last year. I don’t think she will be released soon so she won’t be killed. I heard some people are also planning to attack her father’s house here in Maiduguri.” 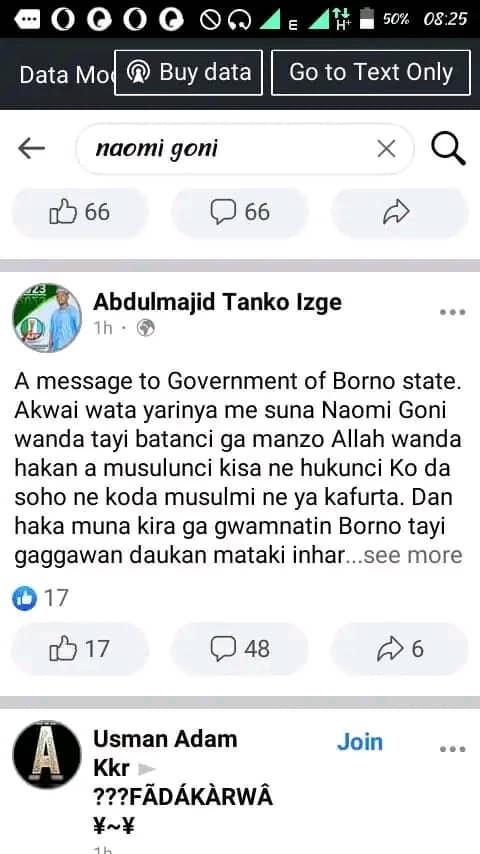