The Federal Government has asked the Supreme Court to set aside the October 13 Appeal Court judgment which discharged and acquitted the leader of the proscribed Indigenous People of Biafra, IPOB, Nnamdi Kanu. 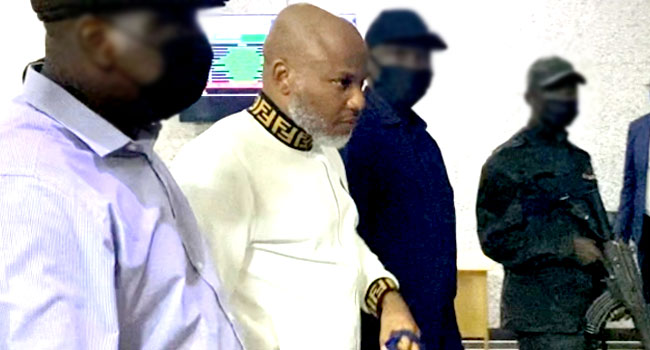 The notice of appeal dated October 18, which was signed by the Director, Public Prosecution of the Federation, Mohammed Abubakar, Senior State Counsel, G. Nweze, Department of Public Prosecution, Federal Ministry of Justice and Assistant Chief State Counsel, D. Kaswe and A. Aluko contained seven grounds of appeal against the Appeal Court judgement.

The President Muhammadu Buhari’s-led government is also seeking a stay of execution of the judgment of the court presided over by Justice Jummai Sankey, pending the hearing and final determination of the appeal before the Supreme Court.

The Federal government noted that the IPOB leader posed a flight risk following the earlier judgement.

The government faulted the Appeal Court’s stance that how the separatist was brought back to the country from Kenya can vitiate and weaken the criminal charges of treason, treasonable felony and terrorism filed against him in 2021.

CAN shocked over inclusion of members in APC PCC