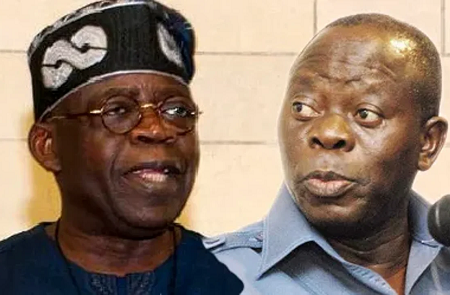 • Claims Giadom not vested with powers to convene NEC meeting
APC, Tinubu, Oshiomole
Barely 24 hours to the meeting of the National Executive Committee of the All Progressives Congress (APC) to decide the fate of its ousted national chairman, Comrade Adams Oshiomhole, former Lagos State governor and national leader of the party, Asiwaju Bola Ahmed Tinubu, has finally taken a position on the crisis.

In a statement he personally signed and made available to newsmen at the weekend entitled, “2023: A different form of Ailment,” Tinubu, who has since declared interest in the 2023 presidential race, attributed the leadership tussle rocking the APC to desperation for 2023 presidential ticket, accusing presidential aspirants of infecting the party with what he called 2023 Virus.

The former Lagos State governor faulted the agitation for the removal of the axed national chairman of the party, accusing those behind it of ingratitude.

Tinubu, who admitted that the Cold War between the APC national chairman, Comrade Oshiomhole and the Edo State governor, Godwin Obaseki, was a potential threat to peace in the party and its electoral fortune in the forthcoming governorship election in Edo State, however, claimed that the aggrieved have not explored the crisis resolution mechanism in the party.

He said: “The more a person obsesses over and constantly engages in political manoeuvring is a warning sign. Not only is he prone to the 2023 virus. He likely has little to offer in the way of good governance. He wants to hold public office that you might serve him not he serve you. For if he had adequately studied and been acquainted with the ways and means of progressive governance, he would be focused on that important task at the present moment. He certainly would not drown himself and all around him in harmful political intrigue.

“It is against this backdrop that we should view the present ploys and plots to undermine the APC National Chairman. The Chairman is human; thus, he has his merits as well as his flaws. Yet his humanity cannot be grounds for his dismissal. If so, the position will forever go vacant.

“The Chairman has been a tireless campaigner and mobiliser for the party. He has steered the party through difficult elections. His contributions should not be undervalued now that the bulk of elections are behind us. To do so would be an act of ingratitude. It is no secret that the Chairman and Edo Governor Obaseki are in dispute. This is unfortunate.

“However, the party has moved through proper procedures within the proper organs of the party to hopefully resolve this spat. All party members know this. Such decisions are part and parcel of internal party governance. Yet, motivated by ambitions that have nothing to do with the quality of the Chairman’s performance, people shunned the agreed party reconciliation mechanism and resorted to other means to oust him. These self-help attempts are unwarranted. These attempts reveal more about the mala fides of their perpetrators than they do about the Chairman.”

On the emergence of the deputy national secretary, Victor Giadom, as acting national secretary, Tinubu further alleged that Giadom was being used to destroy the party by certain forces he claimed wanted to hijack party structures and organs ahead of 2023.

“The plotters launched their attack solely because they perceive the chairman as an obstacle to their 2023 ambitions. People went to court knowing full well the party constitution prohibits such action because these people had not yet exhausted all internal disciplinary procedures. We even had a national deputy secretary improperly call for a NEC meeting on the basis that he believed himself the acting national chairman. Clearly, this man would not have summoned the temerity to make such a move had he not been instigated by powerful individuals who he thought would reward or, at least, protect him for committing the wrongful act.

“Those engaged in these manoeuvres see themselves as clever or cunning. They do so because they only understand the mean craft of political intrigue. They have yet to understand the value and long-term utility of democratic governance. Thus, they embark on the strangest of quest.

“They would rather dismantle and weaken the institutional core of their party just to gain control of that weakened edifice in order to pilfer the party nomination, which they crave. This is more than sad.”

Tinubu cautioned other presidential hopefuls to put a halt to their campaigns which he noted was inimical to the commitment of the sitting President, Muhammadu Buhari to deliver on his electoral promises.

He said: “In a broader context, those afflicted with the 2023 virus do a grave disservice to President Buhari and his administration. They should be trying their best to help the president. Instead of seeing President Buhari as our present leader and commander-in-chief, their sole contemplation is upon his eventual exit. Yet, not even a full year has passed since his second inaugural. How can they be committed to helping him realise his mandate when the fullness of their gaze is affixed to seizing this very mandate for themselves?

“The president is faced with many challenges. He is fighting hard on security to keep the population safe. He is pushing for economic reforms that will augur future sustainable growth. His disdain for corruption remains unwavering.

“Add to it now the Corona crisis and its resultant social as well as economic impact. Politicians express loyalty to him but the words of too many of our politicians are like butter under a burning sun; they melt quickly away. Better to be loyal indeed. Instead of trying to manipulate party and other mechanisms solely to their political gain, it is time to shelve political intrigue for the time being. It is time for all party members to truly see what is at stake and work with Mr President for the collective good of the nation.

“This means we must rally around President Buhari. Instead of everyone saying they are working for the party and nation but going their separate ways based on their selfish designs, we must help him build a stronger national consensus on policies that will ensure safety and bring greater prosperity. If need be and when called upon, we must offer ideas and suggestions that move policy and progress forward.This is the time for governance. It is not the moment to bring the politics of 2023 into 2020. In due course, 2023 shall come. Nothing can prevent it. However, that time is not today. If we are earnest, the present offers sufficient work and challenges for us without trying to add to it by rushing the future. Let us dedicate our energies to helping President Buhari win the present. In this way, you better secure the future for the nation, the party and even for whatever personal ambitions you may nurture.”