Apara, who is a former MD of the consulting firm had In a writ of summons he filed at a Lagos High Court on October 2, 2020, alleged that Tinubu demanded 70 percent of the shareholding through his nominated proxies and that the company had been involved in fraud, tax evasion and money laundering.

But responding in a statement on Friday, the current MD of Alpha Beta, Akin Doherty said that Apara’s allegations against Tinubu “in particular, show that he is bent only on creating sensational headlines to deflect attention from his own criminal activities.”

The statement read in full:

“We have seen the allegations circulating on social media as well as the online reports of the court summons of which we are yet unaware.

“The fact is that Dapo Apara began making his untrue allegations in the aftermath of his removal as Managing Director of Alpha Beta for fraud and unethical practices. While he was MD, Apara used his position to siphon huge sums of money from the company including but not limited to fraudulently converting $5 million; money allegedly used to pay for cloud based services that were eventually discovered to be worth less than $300,000. 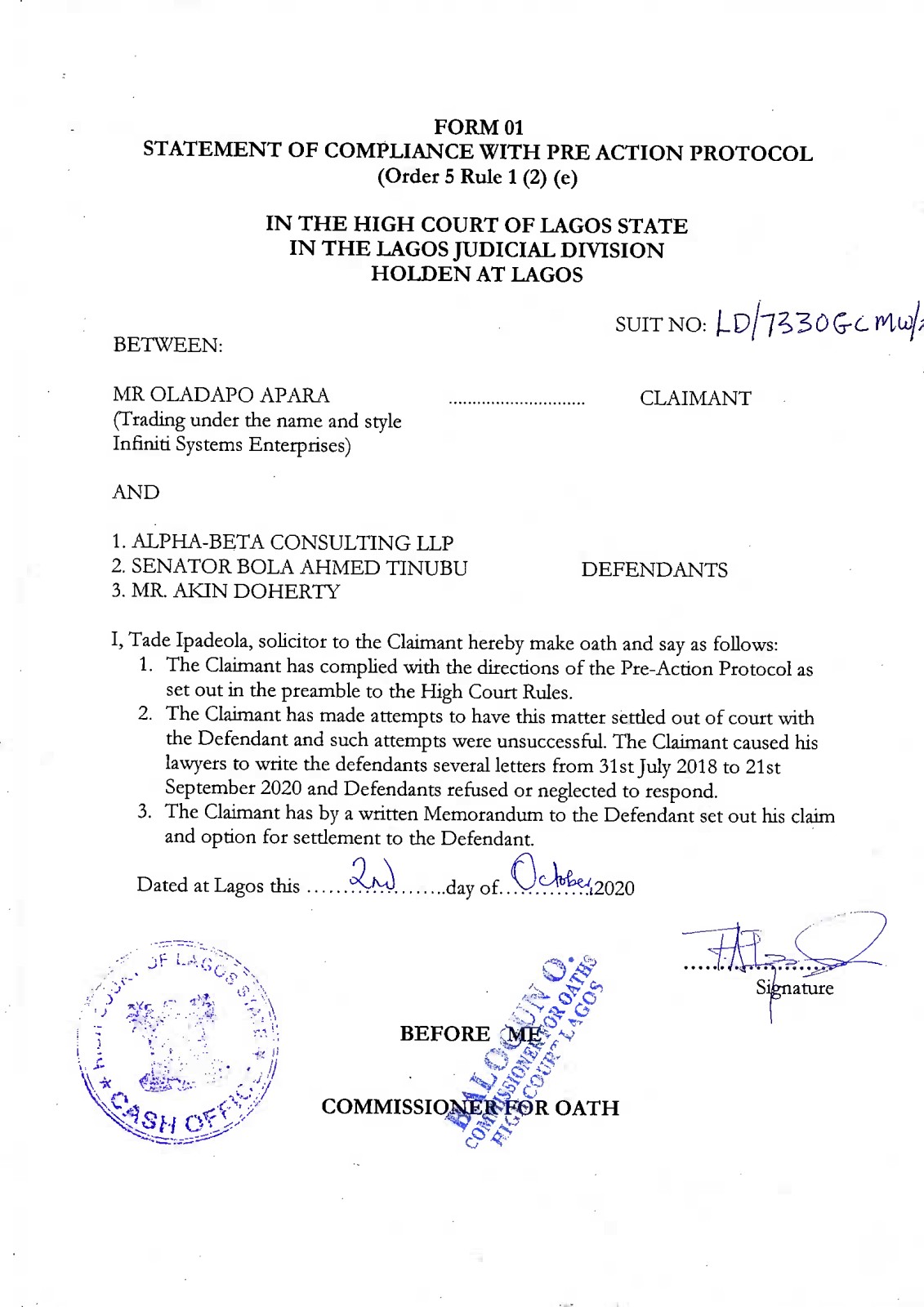 “Mr. Apara, who was a signatory to all the bank accounts of Alpha Beta from inception until his removal, received all his payments and entitlements until June 2018 when he was removed after his fraudulent misconduct was discovered. In July 2018 further evidence of his fraudulent and unethical practices was uncovered, including the revelation that he converted approximately N6 billion belonging to Alpha Beta to his personal use. This fraud was reported to the authorities and Mr. Apara was subsequently invited to return to Nigeria from his hiding place in Dubai to render account. To date, he has refused to do so. Instead, Mr. Apara chose to embark on an aggressive smear campaign seemingly in an effort to blackmail us into ending the investigations into his misconduct.

“Specifically in response to the court summons now circulating on social media, we would like to state as follows:

1. Contrary to the sensational headlines, designed to embarrass and blackmail, the case presented by Mr. Apara does not disclose even a single piece of evidence of fraud or criminal activity on the part of any of the alleged defendants. The case brought by Mr. Apara is, simply put, an extension of his campaign of calumny; launched to avoid the consequences of his fraudulent conduct over the years.

2. This court action by Dapo Apara is the continuation of Mr. Apara’s blackmail tactics and an attempt to distract from the huge funds he misappropriated from Alpha Beta while he was in charge of its affairs.

3. Since 2018, he has filed many suits in Lagos and Abuja on the same matter, engaged in Arbitration, the Police, EFCC and ICPC. However, in all that time, he has steadfastly refused to honour all invitations by the authorities to return to Nigeria and account for the huge funds he misappropriated.

4. The uncorroborated allegations against Asiwaju Bola Tinubu by Dapo Apara, in particular, show that he is bent only on creating sensational headlines to deflect attention from his on criminal activities.

5. Although, we have not been served with the court summons, we look forward to the opportunity the case provides to publicly present the full picture of Mr. Apara’s misconduct, deceit and fraud and to have the matter resolved by the court once and for all.”