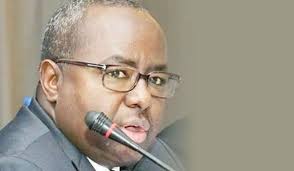 The suspended Director-General of the Securities and Exchange Commission (SEC), Dr Mounir Gwarzo, on Monday, told an FCT High Court Maitama that the prosecution did not establish any prima facie case against them to enter any defence.

Gwarzo alongside an Executive Commissioner in the Commission, Zakawanu Garuba, were arraigned on a five-count charge by the Independent Corrupt Practices and Other Related Offences Commission (ICPC).

The five count bordered on alleged misappropriation to the tune of about N115 million and conferment of corrupt advantage on a public officer before Justice Hussein Baba-Yusuf.

They however, pleaded not guilty to the charge.

Gwarzo, through his counsel, Mr Abdulhakem Mustapha SAN, urged the court to hold that the prosecution has not been able to adduce any credible evidence to make the defendant enter any defence.

He informed the court that the no-case submission he prayed for was brought pursuant to Sections 302 and 303 of the Administration of Criminal Justice Act (ACJA), 2015.

According to him, the prosecution had failed to make out any prima facie case against Gwarzo, adding that the evidence adduced were all contradictory.

He submitted that the prosecution in its written address on the submission relied on the law on certain political office holders and admitted that SEC was not mentioned in the said law.

Specifically, he urged the court to uphold the no-case submission by the first defendant as well as discharge and acquit him of the charge against him.

Counsel to Garuba, Mr Robert Emukpoeruo, also argued that the prosecution had failed from the evidence adduced to make any prima facie case against the second defendant.

He said the evidence adduced by the prosecution during hearing has not established any ingredients of the offence said to have been committed by Garuba.

He, then, urged the court not only to uphold the no-case submission but also discharge and acquit the second defendant.

In his submission , the prosecution counsel, Mr Raheem Adesina, urged the court to dismiss the no-case- submission of the defendants and ask them to enter their defence.

He argued that there was no single word of severance benefit in the SEC Board resolution in July, 2002 (Exhibit ICPC 3).

He said that what was approved and collected was severance benefit when the first defendant never retired from SEC.

The prosecution sought the leave of the court to amend the five-count charge against the defendants brought pursuant to Section 216 of ACJA.

The defendants pleaded not guilty to the amended charge when it was read to them in the open court.

Justice Baba-Yusuf after listening to their submissions, adjourned until April 12, for ruling on the no-case submission filed by the defendants. (NAN)

‘Agbo Jedi’ will damage your Kidney – WHO warns