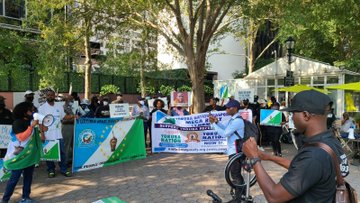 Members of the Nigerian Indigenous Nationalities Alliance for Self-Determination (NINAS) stormed the United Nations headquarters in New York, pressing international leaders to make it easier for Nigeria to have a referendum.

On Tuesday, agitators assembled at the UN offices, and on Wednesday, they returned to press their demand for a referendum.

Protesters on the streets of New York, photographed by SaharaReporters, are demanding a vote to allow them to form their own countries.

The group has previously stated that it would protest during the United Nations General Assembly’s 76th Session, which will be held in New York from September 14 to 21.

'Deliver Us From Union Of Death In Nigeria'—Yoruba Nation Agitators, Others Protest At UN Headquarters To Demand Referendum | Sahara Reporters https://t.co/OLYzBrTlDK pic.twitter.com/GLlThXFY6Q

Some of the protesters carried placards bearing inscriptions such as, “End Nigeria to save lives”, ”Nigerian Army killing Nigerians, Buhari is a tyrant leader”, and “We demand a referendum to decide our nationhood now”.