The Leader of the Yoruba Pan Socio-Political Group, Afenifere, on Wednesday led the group to the presidential rally of the Labour Party in Ibadan, Oyo State. 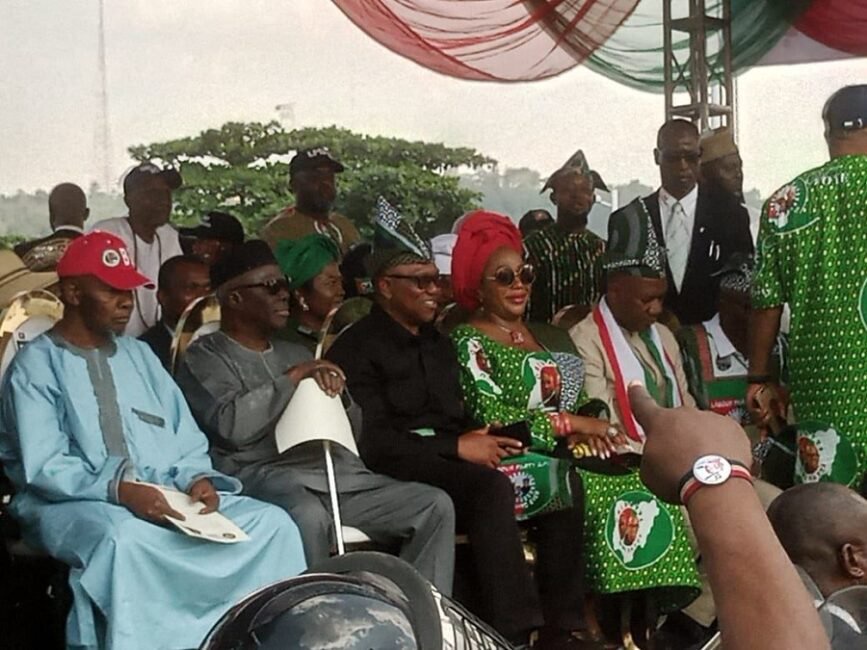 The rally which is ongoing as at the time of filing this report witnessed a huge turn out of supporters.

Adebanjo who led his group to the rally was ushered into the podium and received by leaders of the party in a video shared on Twitter.

Apart from Adebanjo, the Secretary General of the group, Sola Ebiseni, and other members of the Afenifere were also in attendance.

However, Tinubu had led his team to visit Pa Reuben Fasoranti, who stepped down as the leader of the Afenifere in Akure, the Ondo state capital in October where he received his blessing causing controversy as to who the group was supporting.

As the controversy raged, Ebiseni, restated the commitment of Afenifere to the presidential aspiration of the South East as being led by Obi while speaking on Arise TV morning Show in early November.

He denounced the meeting Tinubu held with Fasoranti declaring that, “The meeting that was held was not an Afenifere meeting. The notice of that meeting was issued in the name of a WhatsApp group, Conscience of Yoruba Nation.

“Those who expressed political inclination at any time were gathered in the WhatsApp group and my brother, Kola Omololu, said he was the Director General.

“He issued a meeting and told people that we are going to hold a meeting in respect of Asiwaju Bola Tinubu’s presidency, and Pa Fasoranti has agreed to preside over the meeting.

“The duration of that meeting was 11am to 1pm, two hours. There was one that was debated from July 29, 2021, to September 27, 2022; 14 months of debate compared to two hours of jamboree. Is that an endorsement? Baba has the power to bless anyone.

“I will give you an example. In 2019, Afenifere endorsed Atiku Abubakar. Several others still came and Baba prayed for them.

“And if you come to the south, you see it from Shonekan, Obasanjo, and professor Osinbajo down the line, and you now say Yoruba lo kan? How do you run a country like that?”

‘Why have you not killed me?’ Turji, Zamfara bandit kingpin taunts military
8 hours ago