This comes barely a day after the reality star announced his engagement to the love of his life in a glamorous video.

Tochi has, however, deleted all posts about his engagement which triggered speculations from fans and loved ones.

The brand influencer’s fiancee, on her side, confirmed the separation with a cryptic note on how she refuses to be a pawn for public attention. “There’s so much more to life than the attention/validation that you seek so much for from the outside world…but it’s not me that’s gonna be used to trend…everybody rest ijn,” she wrote. 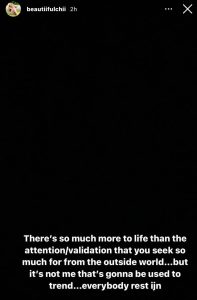 ‘Instead Of Coming Out To Rant With You Openly, I Will Deal With You Lowkey’ Bobrisky Throws Shade At Tonto Dikeh