The young set of curlers representing Nigeria at the ongoing World Junior-B Curling Championships in Lohja, Finland have what it takes to become world beaters in a few years’ time.

This was the assertion made by Daniel Damola, President of the Nigeria Curling Federation, NCF as he reviewed the country’s performance so far in Finland.

According to the NCF President, the outing in Finland is more of an eye-opener for the Nigeria contingent, who are only being exposed to competing on ice for the very first time.

Even with the losses recorded in the games against Latvia, Austria, Spain and then Italy, Mr Damola noted that the players have shown great potential that can be developed with the right resources and support system,

“When the team played against Latvia, they lost,0-24, being their first experience because they only had two days to train. 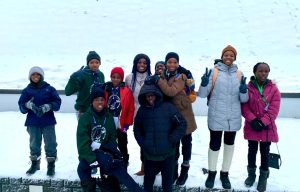 “You can imagine kids that are coming from sub-Saharan Africa that have not been on the ice before getting on ice, having less than 48 hours of training on how to slide, how to move from the arc, how to deliver stone, how to play stones and then how to sweep at the same time within the 24-48 hours window to train.

“I think it speaks volumes that these kids have something in them.”

Having shown great improvement as they progressed in their group games; especially in Friday’s tie against Italy, the NCF President is confident that the lads are on the right path to stardom.

“They are the future of curling, watch out for them. You will see that these kids will be world-beaters because I think they played so well. The only thing that worked against them is the placement of stone because of their lack of experience and this is their first time stepping on ice.

“I think we can do better in our subsequent games. I believe we will do better because the first time they played, they won five against us in the first innings, and at the second innings. It was six and then they now dropped to 3,4,2 and so on.

“They are picking up and we believe they will do better because they were lacking some few technicalities being their first time on ice. And then to play an international championship of that magnitude, they also played against older kids that have gotten the experience of maybe 5,6,10 years ahead of them. They did well.” the excited NCF President added.

The top three women’s and men’s teams will qualify from this event to the World Junior Curling Championships.