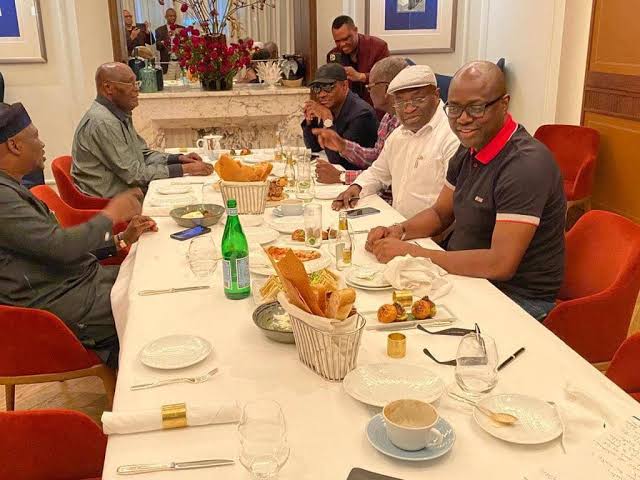 Wike is not happy with the PDP presidential candidate, Atiku Abubakar after the latter settled for the Delta State Governor, Ifeanyi Okowa as his running mate despite reportedly having an agreement to run with the Rivers State’s governor on a joint ticket after Wike lost to him in the primary election.

In September, Wike, Makinde and Ortom met in London and today’s meeting is expected to take certain decisions ahead of the 2023 poll.

It was learnt that Monday’s decision by the party and Atiku to flag off the campaign without Wike and his allies may have informed the latest meeting.

So far, efforts to reconcile Atiku and Wike’s allies have not been successful. The Board of Trustees of the party led by the acting Chairman, Adolphus Wabara, set up a reconciliation committee to intervene in the lingering crisis but have been unable to broker peace as expected.

Wike has vowed to remain in the party, promising however not to have anything to do with the presidential campaigns unless Ayu leaves.

This comes as the PDP has described the candidate of the All Progressives Congress, Asiwaju Bola Tinubu as someone dazed by the resounding presentation of Atiku at the hugely successful flag-off of the presidential campaign in Uyo.

The party maintained that Tinubu has become so disoriented that he can no longer articulate or engage in any productive and focused political discourse.

The PDP made the declaration on Wednesday, via a statement by its spokesperson, Debo Ologunagba, insisting that the APC’s presidential candidate lacks depth as reflected in his recent utterances against other political parties.

Meanwhile, the spokesperson of the Atiku/Okowa presidential campaign, Kola Ologbondiyan has given Nigerians confidence that the anguish and pains they are presently experiencing under the ruling All Progressives Congress would cease when Atiku wins the 2023 poll.

Ologbondiyan indicated an interaction with some PDP youths in Abuja on Wednesday.

He pointed out that the PDP and its presidential flag bearer were worried about the pains and sufferings the APC has inflicted on citizens in the last seven years.

He stated, “Among the arrays of presidential candidates, only Atiku Abubakar has the practicable plan on how to end the pains, the hunger, the starvation, the economic woes, the lower purchasing power and the sense of hopelessness which the APC administration has brought upon Nigerians.