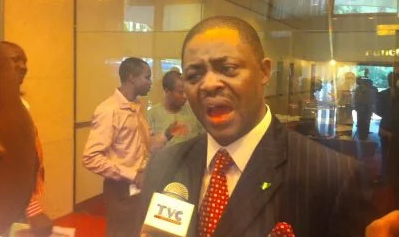 News Direct recalls that Tukur Mamu, who is said to be a spokesman of the controversial Islamic cleric, Gumi was arrested in Egypt on Tuesday and repatriated on Wednesday.

The suspect is currently in the custody of the Department of State Services, DSS, who raided his home on Thursday and recovered several items.

However, in a statement he personally signed on Friday, Fani-Kayode, a lawyer, alleged that both “Mamu and Gumi are associates of former Vice President Atiku Abubakar, the Waziri Adamawa and the presidential candidate of the opposition PDP”.

According to him, Atiku Abubakar, Ahmad Gumi and Tukur Mamu “are close NOT merely because they took a picture but because they have TRAVELLED together all over the country in private jets on several occasions.

“I say they are close to Atiku Abubakar because they are hardline and strong supporters and backers of the PDP, they have spent plenty of time with him over the last few years and they are in touch with him on a regular basis.

“I say they are close to Atiku Abubakar because they are amongst those that insisted that he should run for the Presidency once again in 2023, clinch the presidential ticket of the PDP and keep power in the North even though the party had zoned the position to the South and even though it has a Northern National Chairman.

“I say they are close to Atiku Abubakar because they have a pathological hatred for and are in stiff opposition to President Muhammadu Buhari, the APC and the Federal Government and they are committed to ensuring that they are removed from power.

“There can be no doubt that their relationship is deep and profound and this requires a thorough examination and clinical investigation by the security and intelligence agencies”.

Strategy, and not noise will win me 2023 presidency - Imumolen, Accord party candidate