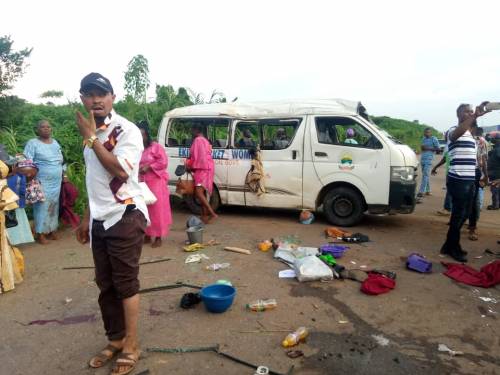 At least 10 wedding guests have died in a motor accident on the Ikere-Ado Road in Ekiti State.

Several others also sustained injuries in the accident.
The accident involved an 18 seater bus with registration number Ekiti LG 05 MUE.

Eyewitnesses confirmed that the victims were returning from a wedding reception when the tragedy occured.

One witness, Abiodun, told SaharaReporters that the driver lost control of the vehicle’s wheel.

He said, “The vehicle was speeding and summasulted several times immediately the driver lost control of the wheel.

“I counted at least 10 bodies on the road before the arrival of officials of Federal Road Safety Corps.”

The bus belonging to Ekiti State Market Women, which was reportedly conveying some guests from a wedding reception was said to have suffered brake failure.

Multiple sources, who spoke on condition of anonymity with The Nation, said the driver of the bus which was on high speed lost control following which the vehicle somersaulted several times.

Bird allegedly turns to an old woman at Oworonshoki in Lagos, confesses